Woman characterized as a “baiana”, costume derived from connections to the predominant African culture in Bahia.

Axé (Portuguese pronunciation: [aˈʃɛ]) is a popular music genre originated in Salvador, Bahia, Brazil in the 1980s, fusing different Afro-Caribbean genres, such as marcha, reggae, and calypso. It also includes influences of Brazilian music such as frevo, forró and carixada. The word Axé comes from the Yoruba term àṣẹ, meaning “soul, light, spirit or good vibrations”.[1][2] Axé is also present in the Candomblé religion, as “the imagined spiritual power and energy bestowed upon practitioners by the pantheon of orixás”.[1]

Roots and History of Axé[edit]

Numerous different African cultures were brought to Brazil due to slavery, which lead to the creation of the vibrancy and complexity of Brazil and its culture. Therefore, several of Brazil’s popular music styles have derived from African cultures and African diasporic influences, including samba, lambada, funk and axé. There is a tendency by Brazilian musicians to draw inspiration and utilize themes, imagery and symbolic symbols from the Candomblé religion and its African roots.[1] Artists such as Gilberto Gil, Vinicius de Moraes, Caetano Veloso, Sergio Mendes, Daniela Mercury, Carlinhos Brown, among others, have all used African culture, religion and symbols as inspirations and lyrics of their songs.[1]

Axé was a fusion of African and Caribbean styles such as merengue, salsa and reggae, as well as being influenced by other Afro-Brazilian musical styles such as frevo and forró. Axé music was labeled in 1980s, but it was already noticeable in the 50s with the incorporation of the “guitarra baiana” (guitar from Bahia).[3] This genre was purely instrumental, and remained so until the 1970s, when Moraes Moreira (of the band Novos Baianos) went solo.

In 1974, carnival in Salvador, Bahia began taking shape. A group of Afro-Brazilians civil rights activists formed Ilê Aiyê, a music ensemble that derived their heavy rhythm from Candomblé’s religious ceremonies. Quickly, Ilê Aiyê gained a huge following, allowing them to influence other artists to incorporate the samba-reggae style and the heavy beats to their music.[3] Groups such as Timbalada, Olodum and Filhos de Gandhi also shared the heavy beats and rhythms with Ilê Aiyê, as well as utilizing African symbols such as typical outfits and instruments that all these bands use to perform. Olodum’s rehearsals soon became a starting point for up and coming artists, composers, and music. In these rehearsals, artists presented and experimented with their music, in search for legitimacy from the population.[4]

In 1985 Luiz Caldas released his LP record called Magia, which included the track Fricote. Although the lyrics were not complex, the rhythm was perfect for the climate in Bahia. The song became the representation of the entertainment of Bahia’s musicality.[4]

When Daniela Mercury released O Canto da Cidade in 1992, axé entered the mainstream pop music scene and became one of the most popular genres in Brazil. The song remained in the first position in the charts for months and ended up becoming an anthem for the people in Brazil. O Canto da Cidade opened doors for artists and bands such as Cheiro de Amor, Asa de Águia, Chiclete com Banana and Banda Eva, who launched Ivete Sangalo and led her to embark in her solo career. These bands are still relevant in Brazilian music scene, and still spreads the axé genre across the country and throughout the world.

Two years prior to Daniela Mercury’s success, the American and European released Margareth Menezes’ Elegibô, which took the style to international audiences. 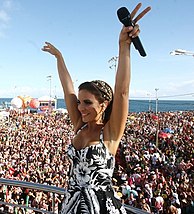 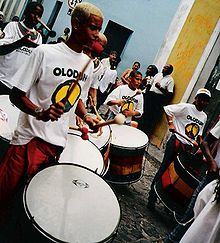 Olodum drummers playing their instruments like in the video clip They Don’t Really Care About Us.

Two great moments in the history of axé were the success of Ivete Sangalo and Claudia Leitte in the United States. Both singers sell out shows wherever they go, Ivete Sangalo sold out Madison Square Garden in 2010. In an interview before her show at MS, she stated: “When I was recognized in Brazil, I was also known, and Brazil is a gigantic place with a lot of talent. I didn’t come here with the intention of being known, but what I came here to do, I came to do right”. In that show, she managed to bring to the United States a “mini-version of Carnival”. Claudia Leitte, on the other hand, gained international prominence when she appeared on Billboard’s Social 50 for 8 weeks after collaborating on “We Are One”, the 2014 World Cup theme song. Pitbull, Daddy Yankee and Jennifer Lopez.[5] Ivete Sangalo is the only artist to have participated in all editions of the Rock in Rio Lisboa show, in addition to having participated in Rock in Rio Brasil, Spain and the United States.

Another notable example for axé music was when Michael Jackson recorded his 1996 hit They Don’t Really Care About Us in Bahia. Spike Lee and directed the music video for this song, the music video was shot in the historic district of Pelourinho in Salvador and in a favela in Rio de Janeiro. Michael Jackson collaborated with Olodum in this video, which featured 200 members of the band playing their different types of drums to the sound of samba-reggae from Salvador. Due to this video, Olodum was exposed to 140 countries, increasing the reach of Afro-Brazilian samba-reggae.