The Bahamas Bowl is an NCAA Division I Football Bowl Subdivision college football bowl game played annually in Nassau, Bahamas, at the 15,000-seat Thomas Robinson Stadium.[2] The Bowl has tie-ins with the Mid-American Conference and Conference USA.

On October 2, 2020, the 2020 edition of the bowl was cancelled due to the COVID-19 pandemic and related travel restrictions.[3] 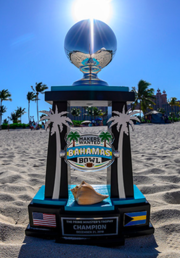 The inaugural edition of the Bahamas Bowl, played in 2014, was the first major (FBS or historical equivalent) bowl game to be played outside the United States and Canada between two U.S. teams since the January 1, 1937, Bacardi Bowl in Havana, Cuba.[4] The game featured teams from the Mid-American Conference and Conference USA;[5] that conference matchup has continued annually.[6] In July 2019, the MAC announced a continuation of its tie-in with the bowl through the 2025–26 football season.[7]

From its inception to 2017, the game was sponsored by the Popeyes Louisiana Kitchen restaurant franchise and officially known as the Popeyes Bahamas Bowl.[8] After Restaurant Brands International acquired Popeyes in 2017, they declined to renew sponsorship. Elk Grove Village, Illinois—”home to the largest industrial park in the United States”—picked up title sponsorship in 2018, with the bowl using the official naming of Makers Wanted Bahamas Bowl.[9] The name lasted until Elk Grove Village ended its sponsorship in March 2020.[10] On May 25, 2022, it was announced that HomeTown Lenders would be the new title sponsor of the game.[11]

Teams with a single appearance

•Elvis Gallegos became the analyst in 2021 after Rob Best died on October 4, 2020.[28] During the 2021 bowl broadcast Kyle Wiggs announced that the Bahamas Bowl broadcast booth had been renamed the Rob Best Broadcast Booth as a memorial to Coach Best.