There have been three baronies created for the Gerard family who lived historically at Bryn, Ashton-in-Makerfield, Lancashire and Kingsley, Cheshire, in the 13th century. The third and current barony was created in 1876.

The earliest traceable member of the family that gave rise to the Barons Gerard was a William Fitz Gerard, who lived during the reign of Henry III of England and obtained his lands in Kingsley, Cheshire, by marriage Emma, daughter of Richard de Kingsley.[2] Traditional genealogical sources have shifted this man back in time and given the family a shared origin with the Hiberno-Norman FitzGeralds, Dukes of Leinster in the Peerage of Ireland, and they adopted the same arms as that famous family, argent, a saltire gules,[1] before the 17th century in place of an earlier coat bearing a lion.[2] They were noted as having exasperated heralds by long ignoring their entreaties to be allowed to record the family’s pedigree, arms, and early land documents.[2] 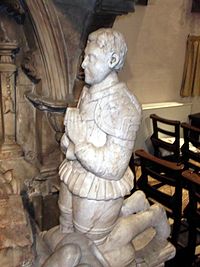 The title Baron Gerard, of Gerard’s Bromley, was created in the Peerage of England on 21 July 1603 for Sir Thomas Gerard (d. 1617), son of Sir Gilbert Gerard (d. 1593) Attorney General between 1559 and 1581 and Master of the Rolls in 1581, who acquired estates at Gerards Bromley and Hilderstone, Staffordshire. The first Baron was Lord President of Wales between 1616 and 1617. The barony passed in direct line of succession until the death of the fifth Baron in 1684 when it passed to his second cousin Charles, a great-grandson of the 1st Baron Gerard, and upon his death without a male heir, to his brother Philip Gerard, a Jesuit priest who died childless in 1733 when the barony became extinct.[3]

The title of Baron Gerard of Bryn in the County Palatine of Lancaster,[5] was created in the Peerage of the United Kingdom in 1876 for Sir Robert Gerard, 13th Baronet Gerard of Bryn.[6]

The title followed the line of the first Baron’s eldest son until the death of the latter’s grandson, the fourth Baron, in 1992. He was succeeded by his second cousin once removed, the fifth and present holder of the barony. He is the great grandson of Captain the Hon. Robert Joseph Gerard-Dicconson, second son of the 1st Baron. The family seat was originally Bryn Hall, Ashton-in-Makerfield, but later Garswood Hall, followed by New Hall, a majestic, modernist, building of considerable size.[1][6] 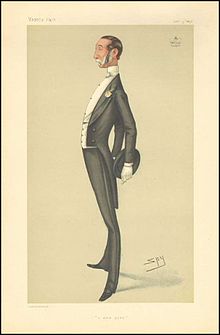 “A new peer” – caricature of Robert Tolver Gerard by Spy published in Vanity Fair in 1878.