Houttuynia cordata, also known as fish mint, fish leaf, rainbow plant, chameleon plant, heart leaf, fish wort, or Chinese lizard tail, is one of two species in the genus Houttuynia (the other being H. emeiensis). It is a flowering plant native to Southeast Asia.[1] It grows in moist, shady locations.[2] It was named after Martinus Houttuyn.

It is considered an invasive plant because of its ability to regrow rhizomes from any segment of its foliage.[3] 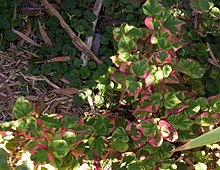 Houttuynia cordata grows in moist to wet soil or slightly submerged in water, as long as it is exposed partially or fully to the sun.[2][1] It can become invasive in gardens and difficult to eradicate as their roots run deep and actively spread. It propagates by division.

It is usually found in one of its cultivated forms in temperate gardens. The ‘Chameleon’ variety (synonymous with H.cordata ‘Court Jester’, ‘Tricolour’, and ‘Variegata’) is slightly less vigorous than the parent species, with stubbier leaves mottled in both yellow and red. Another common variety, ‘Flore Pleno’, has masses of white bracts and retains the vigor of the parent species.

Houttuynia cordata has been naturalized in North America.[4]

It is commonly grown as a leaf vegetable, and is used as a fresh herbal garnish.[2] The leaf has an unusual taste that is often described as ‘fishy’ (earning it the nickname “fish mint”), so it is not enjoyed as universally as basil, mint, or other more commonly used herbs.[citation needed]

In northeastern India, it is commonly used in salads, salsas, or cooked with other vegetables, and as a garnish over side dishes. The tender roots can also be ground into chutneys along with dry meat or fish, chilies, and tamarind. It is taken raw as salad and cooked along with fish as fish curry. In Japan and Korea, its dried leaves may be used as an herbal tea, which is believed to have healing properties. It is called ドクダミ茶 (“dokudami”) in Japan.

In Vietnamese cuisine, it is called giấp cá, and it is used with grilled meat and noodle salad dishes.[5] Fish mint may be used as a garnish with several Vietnamese dishes, such as gỏi cuốn, stir-fried beef with fish mint salad,[6][7] and bánh xèo.[8] 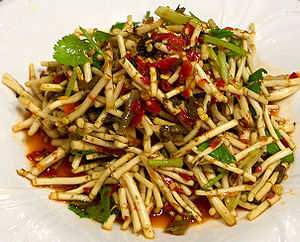 Zhe’ergen is often served as a cold salad after being washed, chopped and tossed with sauces derived from vinegar, chilli, coriander and soy sauce.

Zhé’ěrgēn (Chinese: 折耳根, “broken ear-root”) is the edible rhizome of Houttuynia cordata (yuxingcao, 鱼腥草 “fish-smelling grass”) with a fresh, spicy, peppery flavour that is used in southwestern Chinese cuisine, i.e. that of Guizhou, Sichuan, Yunnan and western Guangxi. Typically the leaves are eaten in Sichuan and the root in Guizhou. Zhé’ěrgēn fried with cured la rou (a dried meat resembling ‘Chinese bacon’) is one of the staple dishes of Guizhou.

The leaves are also a little peppery and are frequently consumed in the region.

Houttuynia cordata was used in traditional Chinese medicine, including by Chinese scientists in an attempt to treat SARS[9] and various other disorders,[10] although there is no high-quality clinical research to confirm such uses are safe or effective, as of 2018. When administered via injection, H. cordata can cause severe allergic reactions.[11]

Chemical compounds that contribute to the aroma of H. cordata include β-myrcene[12][13] and 2-undecanone.[14]