Perilipin, also known as lipid droplet-associated protein, Perilipin 1, or PLIN, is a protein that, in humans, is encoded by the PLIN gene.[5] The perilipins are a family of proteins that associate with the surface of lipid droplets. Phosphorylation of perilipin is essential for the mobilization of fats in adipose tissue.[6]

The perilipins are considered to have their origins in a common ancestral gene which, during the first and second vertebrate genome duplication,  gave rise to six types of PLIN genes.[9] 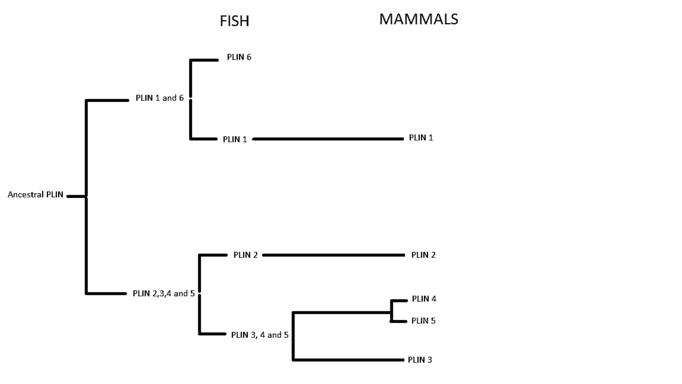 Evolution of perilipin family. In fish, PLIN 1 to 6 can be found, whereas in mammals only PLIN1 to 5.

A prediction of the tertiary structure of Perilipin-1 (A) modelled to suggest potential inhibitors. 4-Nitrophenyl 2,3,4-Tri-O-levulinoyl-α-D-mannopyranoside (B) was predicted to be so based on the hydrogen bonds that could be established between both structures (C).[10]

Whereas perilipin-1 is coded by a single gene, alternative mRNA splicing processes can led to three protein isoforms (Perilipin A, B and C). Both Perilipin A and B present common N-terminal regions, differing in the C-terminal ones.[14] Concretely, beginning from the N-terminal of Perilipin-1, a PAT domain -characteristic of its protein family- can be found, followed by also characteristic repeated sequence of 13 residues -which form amphipathic helixes with an active role in linking membranes.[15]– and a 4-helix bundle before the C-terminal carbon[16] In Perilipin A, lipophile nature is conferred by the slightly hydrophobic amino acids concentrated in the central 25% of the sequence, region that anchors the protein to the core of the lipid droplet.[17]

Unlike its human orthologous it is composed by 517 amino acids in the primary structure of which several regions can be identified. Three moderately hydrophobic sequences (H1, H2, H3) of 18 rem (243-260 aa), 23 rem (320-332 aa) and 16 rem (349-364 aa) can be identified in the centre of the protein, as well as an acidic region of 28 residues where both glutamic and aspartic acids add up to 19 of them. Five sequences 18 residues long that could form amphipathic β-pleated sheets -according to a prediction made through LOCATE program- are found between aa 111 and 182. Serines occupying positions 81, 222, 276, 433, 492 and 517 act as phosphorylation sites -numbered from 1 to 6- for PKA,[18] as well as several other threonines and serines which add up to 27 phosphorylation sites.[19]

Perilipin is a protein that coats lipid droplets (LDs) in adipocytes,[20] the fat-storing cells in adipose tissue. In fact, PLIN1 is greatly expressed in white adipocytes.[21]

It controls adipocyte lipid metabolism.[22] It handles essential functions in the regulation of basal and hormonally stimulated lipolysis[23] and also rises the formation of large LDs which implies an increase in the synthesis of triglycerides.[21]

In humans, Perilipin A is the most abundant protein associated with the adipocyte LDs[7] and lower PLIN1 expression is related with higher rates of lipolysis.[24]

Under basal conditions, Perilipin acts as a protective coating of LDs from the body’s natural lipases, such as hormone-sensitive lipase (HSL) and adipose triglyceride lipase (ATGL),[25][24] which break triglycerides into glycerol and free fatty acids for use in lipid metabolism.[6]

Specifically, in the basal state Perilipin A allows a low level of basal lipolysis[26] by reducing the access of cytosolic lipases to stored triacylglycerol in LDs.[23] It is found at their surface in a complex with CGI-58, the co-activator of ATGL. ATGL might also be in this complex but it is quiescent.[27]

Under lipolytically stimulated conditions, PKA is activated and phosphorylates up to 6 Serine residues on Perilipin A (Ser81, 222, 276, 433, 492, and 517) and 2 on HSL (Ser659, and 660).[27] Although PKA also phosphorylates HSL, which can increase its activity, the more than 50-fold increase in fat mobilization (triggered by epinephrine) is primarily due to Perilipin phosphorylation[citation needed].

Then, Phosphorylated HSL translocates to the LD surface and associates with Perilipin A and Adipocyte fatty acid-binding protein (AFABP).[27] Consequently, HSL gains access to triacylglycerol (TAG) and diacylglycerol (DAG), substrates in LDs. Also, CGI-58 separates from the LD outer layer which leads to a redistribution of ATGL.[23] In particular, ATGL interacts with Perilipin A through phosphorylated Ser517.[27]

As a result, PKA phosphorylation implies an enriched colocation of HLS and ATGL which facilitates maximal lipolysis by the two lipases.[23]

Perilipin is an important regulator of lipid storage.[6] Both an overexpression or deficiency of the protein, caused by a mutation, lead to severe health issues.

Perilipin expression is elevated in obese animals and humans. Polymorphisms in the human perilipin (PLIN) gene have been associated with variance in body-weight regulation and may be a genetic influence on obesity risk in humans.[28]

This protein can me modified by O-linked acetylglucosamine (O-GlNac) moieties and the enzyme that intervenes is O-GlcNAc transferase (OGT). An abundance of OGT obstructs lipolysis and benefits diet-induced obesity and whole-body insulin resistance. Studies also propose that an overexpression of adipose O-GlcNAc signaling is a molecular expression of obesity and diabetes in humans.[29]

In humans, studies suggest that a deficiency of PLIN1 causes lipodystrophic syndromes,[32] which disables the optimal accumulation of triglycerides in adipocytes that derives in an abnormal deposition of lipids in tissues such as skeletal muscle and liver. The storage of lipids in the liver leads to insulin resistance and hypertriglyceridemia. Affected patients are characterized by a subcutaneous fat with smaller than normal adipocytes, macrophage infiltration and fibrosis.

These findings affirm a new primary form of inherited lipodystrophy and emphasize on the severe metabolic consequences of a defect in the formation of lipid droplets in adipose tissue.