In May 1960, voters in the Channelview, Deer Park, Galena Park, La Porte, and Pasadena school districts approved the creation of East Harris County Union Junior College, elected seven members to serve on the Board of Regents and authorized the Board of Regents (now Board of Trustees) to levy a tax for the college operations and maintenance.

On February 16, 1961, the Board of Regents changed the name of the district to The San Jacinto Junior College District. Using renovated buildings in Pasadena, the college welcomed 876 students to its first classes in September 1961. The San Jacinto Junior College District was approved and accredited by the Texas Department of Education when the college opened. The college was granted full membership in the Association of Texas Colleges and Universities on April 6, 1963. On November 4, 1968, Sheldon Independent School District was voted part of the college district.

On November 30, 1966, the Southern Association of Colleges and Schools first granted San Jacinto college accreditation. The north and south campuses were first accredited in 1976 and 1979, respectively. The most recent reaffirmation of accreditation for all three campuses occurred in 2019.

Bonds issued in 1972 included funds for the North Campus. Following five terms of extension classes offered at North Shore High School, the North Campus opened for classes on its site in the fall of 1975. In 1976, bonds were approved for a third campus. After several terms of extension classes offered at J. Frank Dobie High School, San Jacinto College South opened for classes in September 1979.

In 1997, James F. Horton became the chancellor, and Adena Williams Loston became the second president of San Jacinto College South and the first African-American president in the district.[3]

Clear Horizons Early College High School opened its doors on the south campus in the fall of 2007. A partnership with Clear Creek ISD, this program allows students to earn an associate degree while simultaneously earning a high school diploma. In 2008, Hurricane Ike inflicted significant damage to the three campuses. Students were back in class in less than three weeks.[4] 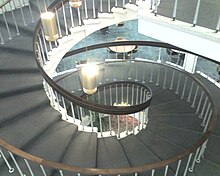 The stairs in the Library in the Central campus

The college has five main campuses and six extension centers. The Central campus is in Pasadena, the North and South campuses are in Houston on Uvalde and Beamer Road respectively. The maritime campus is located in La Porte, Texas. The college opened its fifth campus at Generation Park in 2020. There are two extension centers in Webster, one at Clear Lake High School, two in Galena Park and one in Pasadena.[5]

San Jacinto College opened its fifth main campus, Generation Park, on August 1, 2020. The site is located in Northeast Houston and primarily serves students from the Sheldon and Humble communities who want to transfer to a four-year university. Students at this location may earn a 2-year academic Associate of Arts (A.A.) or Associate of Science (A.S.) degree at Generation Park.[6]

In 2020, San Jacinto College was awarded the Excellence and Equity in Community College STEM Award by the Aspen Institute and Siemens Foundation.[10]