Scouting in Maryland has a long history, from the 1910s to the present day, serving millions of youth with activities that have adapted to the changing cultural environment but have always been rooted in an active outdoor program. 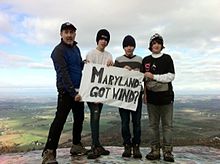 Scouting in Maryland dates back to the earliest days of the movement. Robert S. Garrett (1875-1961) was among the
twenty-five men who organized the National Council of the Boy Scouts of America in 1910. Mr. Garrett was a Baltimore civic leader, prominent philanthropist, explorer and Olympic champion. Named in the federal charter of 1916, Mr. Garrett served on the BSA National Executive Board from 1912 to 1919 and remained a member of the National Council until his death. He was one of the original nine Baltimore recipients of the Silver Beaver Award in 1931.

The first seven Scout Troops in Baltimore were granted charters by Scout Commissioner H. Laurance Eddy (1884-1962) on September 9, 1910. (Eddy’s role as Scout Commissioner was the combined predecessor to the roles of Council Commissioner and Council Scout Executive.) A month prior, Robert Garrett and Laurance Eddy ensured that a patrol of eight Scouts from Mount Washington Troop 1 (organized earlier that summer) attended the first National Boy Scout camp held at Silver Bay on Lake George.

The Maryland Council of Boy Scouts of America was duly incorporated on May 9, 1911. The initial board of directors was composed of Robert Garrett, William H. Morris, James Carey, Jr., Frank Smith and Stuart S. Janney. The first Scout headquarters was at 512 Continental Trust Building (now One Calvert Plaza.) Almost immediately, the council was referred to as the “Baltimore Council.” From 1911 through 1921, the Baltimore Council operated as a department of the Baltimore Social Service Corporation, sharing a finance director, advisory board and other office support with the Public Athletic League, the Social Workers’ Bureau and other Garrett-supported civic endeavors.[1]

By 1917, the Baltimore Council provided less support beyond Central Maryland as local councils were created in Frostburg, Westminster, Salisbury and Frederick.

The Order of the Arrow Nentico Lodge was established in 1922 by E. Urner Goodman. The 1923 National Order of the Arrow Lodge Meeting was held at Baltimore, Maryland. In the early 1920s, there were several camps named Rodney in the Delmarva area. However, the current Rodney Scout Reservation was established in 1921. In Severna Park, was Camp Linstead, the camp of Nentico Lodge in its early years.

There are currently six Boy Scouts of America (BSA) local councils serving the youth of Maryland. All the councils are within the Northeast Region of the BSA.

In February 2009, the Star-Spangled Banner Flag or the Great Garrison Flag (also known as the 15 Star Flag) was officially adopted as the Official U.S. Flag of the Baltimore Area Council by authority of the Council Executive Board. A public ceremony was conducted on February 8, 2009, on the occasion of the 99th Anniversary of the incorporation of the Boy Scouts of America in Washington, D.C., by William D. Boyce, a Chicago publisher. Representatives of Scout Units, Districts, the Council and the public were on hand to commemorate the adoption at the Shapiro Scout Service Center. This was done in anticipation of the bicentennial commemoration at Fort McHenry in 2014 of the battle which inspired Francis Scott Key to write his inspirational poem which later became our national anthem, The Star-Spangled Banner. 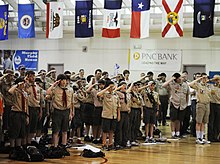 Broad Creek Memorial Scout Reservation (commonly called “Broad Creek”) consists of two separate camps. Camp Saffran focuses on Scouts BSA and Venture Scouts. Camp Spencer focus on Cub Scouts. A third camp, Camp Oest, was also focused on Cub Scouts before being combined with Camp Spencer; the name is still used as “Camp Oest at Camp Spencer”. Lake Straus was formed in the 1940s when Susquehanna River tributary Broad Creek was dammed.[3] The facilities at the reservation that are “used by more than 20,000 boys and adults every year.”[4] 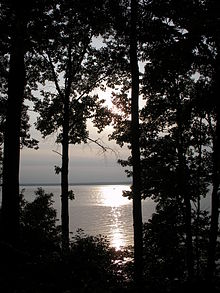 Del-Mar-Va Council serves Scouts in Delaware and the eastern shore portions (east of the Chesapeake Bay) of Maryland and Virginia.

Rodney Scout Reservation, also known as Camp Rodney or simply RSR, is a Scouts BSA camp located near North East, Maryland. Along with Henson Scout Reservation, it is one of the two main Scout camps in the Del-Mar-Va Council. Covering 900 acres (3.6 km2) including the Bull Mountain Wilderness Area, it shares a long border with the woodlands of Elk Neck State Park. Along with Broad Creek Reservation, Rodney has placed much of its land into conservation easements for permanent legal protection from residential or commercial development. A number of facilities and campsites directly overlook the Chesapeake Bay which is used for an active aquatics program. 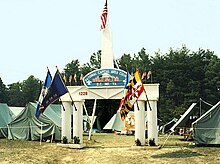 The National Capital Area Council (NCAC) is a local council within the Northeast Region and serves Scouts in the Washington, D.C., Maryland, Virginia, and the United States Virgin Islands.[5] The council offers extensive training, and administrative support to units.[6] It is rated as a “Class 100” council by the National Council (headquarters office), which denotes that the NCAC is among the very largest in the country. Chartered in 1911, it is also one of the oldest. The council is divided into 23 districts serving ten counties in Northern Virginia, six counties in Maryland, the District of Columbia, and the US Virgin Islands. The council has a 2.5 to 1 ratio of youth members to adult leaders, which is among the highest of all the councils. The youth retention rate approaches 80%.[7]

The Chester County Council serves Chester County, Pennsylvania and part of Cecil County, Maryland in that state’s northeast corner. It is one of the oldest councils in the nation. Its Horseshore Scout Reservation straddles the Mason–Dixon line between these two counties.

The Mason Dixon Council is made up of three districts:

The Order of the Arrow lodge for the Mason-Dixon Council is Guneukitschik Lodge No. 317.

Girl Scouts of the USA[edit]

Four Girl Scout Councils serve Maryland but only one is headquartered in the state.

The only council with headquarters in Maryland, it serves over 30,000 girls in Baltimore City, Anne Arundel, Baltimore, Carroll, Harford and Howard Counties.

It originated the Girl Scouts Beyond Bars program that tries to maintain ties between female prisoners and their daughters by having them participate in Girl Scouts.[9] The program has been replicated in some 25 other Girl Scout Councils.

An international Polish Scout Jamboree with several thousand participants took place in Maryland in the summer of 2006, composed primarily of Scouts-in-Exile from Canada and the United States. It was held at Baltimore Area Council’s camp at Broad Creek Scout Reservation in an area known as Camp Spencer.