Overview of transport in Rhône-Alpes

Rhône-Alpes is a major European transit hub, linking northern France and Europe to the Mediterranean area. Millions travel along its motorways in summertime from Paris to holidays at the sea. The E15 Euroroute (Britain to Spain) runs through the region. There are international airports at Lyon, Grenoble and Saint-Étienne and many other minor airports and airfields.

The region is also a transport hub for the rail-network with the TGV running through Lyon from Paris and the north, to the Mediterranean. A trans-national, high-speed rail-link is projected from Lyon to Turin.

Numerous cities of the region Rhône-Alpes are served by TGV :

Every weekend in winter, Bourg-Saint-Maurice becomes one of the busiest stations in the region, when it is served by TGV trains from Paris and from Brussels, and by Eurostar from London.

When a project of RER called Réseau Express de l’Aire urbaine Lyonnaise (REAL) is built, it will be the first RER of the province, the only other one being in Paris.
Another RER called CEVA is planned for 2017, for the region of The leman lake (Geneva, Annemasse, Thonon-les-bains, Evian-les-bains) with extensions to La roche / foron, Annecy.
Another railroad project is in realisation in Grenoble to link the suburbs.

There are also tourist train lines in Rhône-Alpes (in Ardèche, in the south of Grenoble and Mont-Blanc)

Rhône-Alpes is a major European transit hub, linking northern France and Europe to the Mediterranean area. Millions travel along its motorways in summertime from Paris to holidays at the sea. The E15 Euroroute (Britain to Spain) runs through the region.

Metro, trams and buses in Lyon

12 transport authorities of public transport are implanted in Rhône-Alpes

The three largest cities of Rhône-Alpes are equipped with streetcars and have a large bus network. The largest, Lyon, has four metro lines.
Lyon and Saint-Étienne have kept their lines of trolley buses and, Saint-Etienne is one of the few cities in France to have retained its trams (in use since 1881).

Many cities also have their bus networks (Valencia the CTAV Chambéry the STAC, Villefranche-sur-Saône, Roanne, etc.). There are also networks of inter-departmental cars.

In winter, additional lines open to connect the valleys to ski resorts. This is the case between Grenoble and Chamrousse.

The Rhône-Alpes region is undergoing profound changes with regard to its rail network and many projects are being developed to the [Express Network of the urban area of Lyons, The Project of the East Rail Lyon, the Tram-train from the west Lyonnais.

The Lyon Metro, in Lyon, opened in 1978 and now consists of four lines. It is part of the Transports en Commun Lyonnais (TCL) system of public transport.

Like the SNCF, but unlike all other French metro systems (excluding the RER), Lyon metro trains run on the left, the result of an unrealised project to run the metro into the suburbs on existing railway lines. The loading gauge for lines A, B, and D is 2.90 m (9 ft 6.2 in),[1] more generous than the average for metros in Europe. The loading gauge for line C is 2.78 m (9 ft 1.4 in).[1] The Lyon Metro owes its inspiration to the Montreal Metro which was built a few years prior, and has the same rubber-wheel cars and station design.[citation needed]
The total track length is 30 km (18.6 mi), 80% of which is underground.

The métro system consists of four lines, A-B-C-D, each identified on maps by different colours: 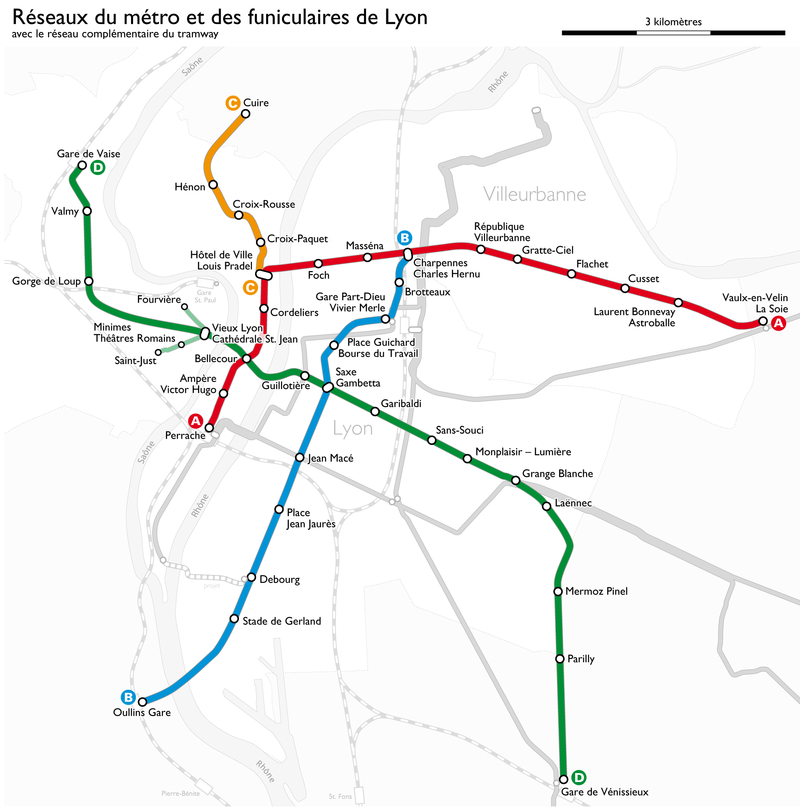 Lines A (Perrache – Laurent Bonnevay) and B (Charpennes – Part-Dieu) were constructed using the cut-and-cover method, and went into service on May 2, 1978. Trains on both lines run on tyres rather than steel wheels.

An extension to Vaulx-en-Velin La Soie on Line A opened in October 2007.

A rack-railway train of line C at the station Croix-Paquet.

The Croix-Rousse-Croix-Paquet rack railway, which was refurbished in 1974, was integrated into the Metro in 1978 as line C, running from (Hôtel-de-Ville to Croix-Rousse). It was extended to Cuire on December 8, 1984.

The line was constructed using various methods; the incline rising through a deep tunnel, the portion on the flat at Croix-Rousse using cut-and-cover, while the section beyond Hénon runs on the surface. The Croix Paquet station claims to be the steepest metro station in Europe, with an incline of 17%.

Line D commenced operation under human control on September 4, 1991 between Gorge-de-Loup and Grange-Blanche. Rubber-tyred trains run automatically with no driver on board, controlled by a system known as MAGGALY (Métro Automatique à Grand Gabarit de l’Agglomération Lyonnaise). The line was extended to Gare de Vénissieux on December 11, 1992, at which time it switched to automatic operation. On April 28, 1997, it was extended again to Gare de Vaise.

Operates from 4:52 am to 12:27 am, maintained by the Centre de Maintenance de Saint-Priest – Porte des Alpes.

Operates from 4:55 am to 12:35 am, maintained by the Centre de Maintenance de Saint-Priest – Porte des Alpes.

Operates from 4:27 am to 12:08 am, maintained by the Centre de Maintenance de Meyzieu.

Line T3, which is 14.6 km long, runs largely on ballasted railroad track. It takes 23 minutes to go from Part-Dieu Villette to Meyzieu – ZI, and runs at a maximum speed of 70 km/h (60 km/h at intersections, of which 26 are equipped with crossing gates). 7 km run near residential areas and are equipped with a noise barrier.

Line T4 runs between Jet d’Eau and Cliniques Feyzin.[3] A future extension is planned from Gare Part-Dieu to Jet d’Eau.

Rhônexpress is an express line which will link Part-Dieu Villette to Saint-Exupéry airport, with intermediate stops at Vaulx-en-Velin – La Soie (transfer to Metro Line A) and Meyzieu ZI. It was scheduled to open in 2009. The Conseil général of the Rhône franchised the operation of this line for 30 years to Rhônexpress, a consortium including Vinci SA (28.2%), Veolia Transport (28.2%), Vossloh Infrastructure Service (4.2%), Cegelec Centre Est (2,8%) and the Caisse des dépôts et consignationsVille et transports – magazine, January 17, 2007.

TCL’s bus network includes more than one hundred bus routes.
Although greatly reduced compared to 1950, the Lyon trolleybus system is still the largest in France.

The tramway network in Grenoble 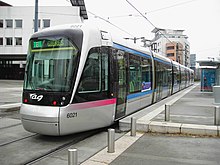 The Tramway de Grenoble is served by a total of 88 pieces of rolling stock. Of those, 58 are TFS trams and the other 35 put in service on the occasion of the opening of the B line extension and the C line are Alstom Citadis trams. 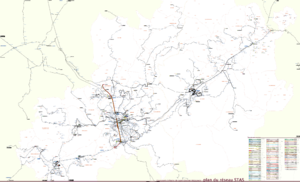 The Society of transport in Greater Saint Etienne (STAS) is the name of the company that manages and operates the various lines of trams, trolleybuses and buses of the Greater Saint Etienne.
Organized and funded by Saint-Étienne Métropole, the society is responsible for transportation to the 43 municipalities. The network is structured around two lines of trams, trolley lines and 54 bus lines that run through the agglomeration.

Rhône-Alpes has several airports, including many regular and seasonal flights to the ski districts.