State Route 606 in Fairfax and Loudoun Counties, Virginia is a secondary state highway[1][2] traversing the communities of Reston, Herndon, Sterling, Arcola, and South Riding. The road is important not only because it is an inter-county connector, but it goes around the back of Dulles Airport, is part of the Loudoun County Parkway, and it provides a shortcut between the Reston / Herndon area and U.S. Route 50. Although the Herndon streets are not technically part of SR 606, they are signed as SR 606, and they connect to streets that are part of SR 606, thus providing a continuous route.[3]

The Town of Herndon is responsible for the maintenance of its streets,[4] although the Virginia Department of Transportation(VDOT) helps towns and cities financially, and has designated these roads with state route numbers.[5]

Although SR 606 technically ends at the Herndon border, roads within Herndon are signed as SR 606, and they provide a direct connector to SR 606 in Loudoun County, so they are included here. When SR 606 enters the town the route changes to Elden Street, the main commercial road of Herndon. When Elden Street intersects with SR 228, Elden Street becomes SR 228. (signed) SR 606 is concurrent with SR 228 / Elden Street to Sterling Road, where the route continues west toward Loudoun County.

In Loudoun County SR 606 continues the path of Sterling Road as a four lane divided highway called Old Ox Road. It heads west until it crosses over SR 28, Sully Road at an interchange. It continues toward the Dulles Greenway (SR 267) as it passes some warehouses on the south side. The intersection with the Dulles Greenway is the planned location for the Route 606 station of the proposed Phase 2 of the Silver Line of the Washington Metro. 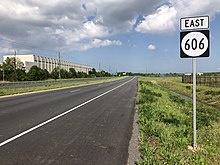 View east along SR 606 in Dulles

After the interchange with the Dulles Greenway, SR 606 turns to the southwest and goes around the back of Dulles Airport. It passes some single-family houses to the west, and Dulles Airport and some low rise office buildings to the east.

VDOT has plans to widen Elden St. between Van Buren Street and the Fairfax County Parkway (SR 286). However, due to budget cutbacks, this project has been put on hold.[6]

KML is not from Wikidata