Sinait, officially the Municipality of Sinait (Ilocano: Ili ti Sinait; Filipino: Bayan ng Sinait), is a 3rd class municipality in the province of Ilocos Sur, Philippines. According to the 2020 census, it has a population of 25,998 people. [3]

The Chapel of the Santo Cristo Milagroso in Dadalaquiten Norte (the white building), taken from the Chapel of the La Virgen Milagrosa in nearby Paguetpet, Badoc. The body of water in the picture is part of the seashore where the two images were allegedly found floating in a box.

Before Magellan discovered the Philippines in 1521, the locality was only a small village of little over a hundred natives who were called “Tirongs.” By nature, these primitive inhabitants were sea-faring warlike. In their fast and picturesque sailboats, they traveled to adjoining and distant places, most particularly to settlements and villages along the Ilocos Coast in Ilocos Norte, Ilocos Sur, La Union, Pangasinan and even Zambales. In those adventures, the “Tirongs “ always challenged the people encountered to tribal wars and fought small battles against them. Often, those sturdy and brave natives came out victorious. Even in their daily chores, those people showed their ferocious characteristics. When the renowned Iberians came, Salcedo was sent to explore and colonized the Ilocos territory during the early years of the Spanish regime, he found the “Tirongs” of Sinait in apogee of the social state. Small battles were daily occurrence so that in the year 1535, when the locality was organized and established as a “Pueblo” Salcedo named the new community as “SIN-NAIT”, a word in the local tongue which means “CONTEST”. As a pueblo, SINAIT embraced and included in its territorial limit such as distant places as RANCHERA DE PAUR”, now the Municipality of Nueva Era in Ilocos Norte and Southern barrios of Badoc of the same Province. The vast territory, however, was reduced to present 78 square kilometers. In the year 1575, the natives fully realized the hardships of pronouncing the term “SIN-NAIT” and to go away with the trouble, Salcedo declared that one of the letter “N” be dropped. Since then, this Municipality has been called “SINAIT”. Nevertheless, it was only in 1913 when the same was “deeded” by the government upon the initiative of the late Don Calixto Cabacungan so that the Municipality Council enacted a resolution to that effect, that SINAIT was adopted as official name of the community to which said resolution was duly approved by the Provincial board of Ilocos Sur and by the Defunct Philippine Legislature.

Sinait houses the Sanctuary of the Miraculous Statue of the Black Nazarene (El Santo Cristo Milagroso), fondly called by its residents as “Apo Lakay,” and a treasure of Ilocandia. History traces the life-sized statue to Nagasaki, Japan. It was probably sent floating in the sea by missionaries operating in secret in Japan (for fear of persecution during the Tokugawa Bakufu). The box was found by local fishermen in the shores of Barangay Dadalaquiten Norte, on the boundary between Sinait and nearby Paguetpet (La Virgen Milagrosa), Badoc, in the year 1620, and fishermen from both towns carried it ashore. They found two statues inside the box—a statue of the Black Nazarene, and a statue of the Blessed Virgin Mary. According to legend, The fishermen from Sinait mysteriously were unable to move the statue of the Blessed Virgin Mary, but had no problems moving the Statue of the Black Nazarene. The fishermen from Badoc, however, were able to move the Statue of the Blessed Virgin Mary (later called the La Virgen Milagrosa) with ease, as they were unable to carry the image of the Black Nazarene. They took the statues to their respective towns, hence becoming their patron saints. In 1656, with a spreading devotion to the Santo Cristo Milagroso due to its miraculous powers, the Black Crucifix was taken to the capital town of Vigan, since an epidemic was raging there and through the devotion of the faithful, many got cured. Because of this, it is considered as an intercessor of all kinds of affliction and sickness. In 1660, because of the growing veneration to the image, the faithful begun the construction of a permanent edifice to house it. It took the people of Sinait eight years to construct the church with funds provides by the Spanish Audiencia. Today the landing site of Apo Lakay still exists in Barangay Dadalaquiten Norte, and is a place of pilgrimage for devotees.

Sinait is politically subdivided into 44 barangays. [5] These barangays are headed by elected officials: Barangay Captain, Barangay Council, whose members are called Barangay Councilors. All are elected every three years.

As major producer of Garlic, Sinait is also known as the Garlic Center of the North. 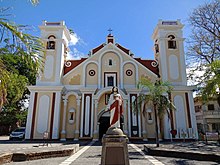 Sinait, belonging to the first congressional district of the province of Ilocos Sur, is governed by a mayor designated as its local chief executive and by a municipal council as its legislative body in accordance with the Local Government Code. The mayor, vice mayor, and the councilors are elected directly by the people through an election which is being held every three years.