Canadian Senate divisions refers to two aspects of the Senate of Canada. First, it refers to the division of Canada into four regional Senate divisions of 24 senators each, as set out in the Constitution of Canada (as defined in subsection 52(2) of the Constitution Act, 1982, consisting of the Canada Act 1982 (including the Constitution Act, 1982), all acts and orders referred to in the schedule (including the Constitution Act, 1867, formerly the British North America Act), and any amendments to these documents.[1] The four regions are the Western Provinces, Ontario, Quebec and the Maritimes.[1] These regions are intended to serve the Senate’s purpose of providing regional representation in the Parliament of Canada, in contrast to the popular representation that the House of Commons is intended to provide.[2] While not within any of the original four Senate divisions, Senate seats are also allocated to Newfoundland and Labrador and the three territories.[1][2] The four divisions can be expanded when the need arises to have an extra two senators appointed to each regional division.

Second, it refers to divisions within a province represented by senators from the Canadian Senate, also known as “senatorial designation”. Under the Constitution, only Quebec has official Senate divisions for each of the senatorial designations within the province.[1] In all other provinces, senators are appointed to represent the province as a whole and the Constitution makes no reference to official senatorial designations for those provinces. Senators from provinces outside Quebec may simply “designate” a district they wish to symbolically represent within their province, which can be named at the time of their appointment or at a later time.[3] These senate divisions have no specific geographic boundaries though their names often give a reference to a general geographic area. However a senator will sometimes create boundaries for their senate division even though it has no legal status. While relatively rare, a senator outside of Quebec can change his or her division in the same manner as party affiliation, simply by notifying the Clerk of the Senate. 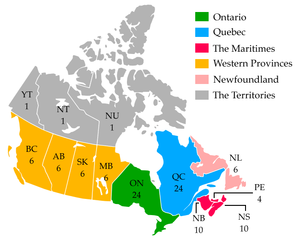 Map of the regional Senate divisions

Unlike the House of Commons, seats in the Canadian Senate are not based upon any population measure or adjusted by population (an exception to this was set out under the Manitoba Act, in which Manitoba’s allotment increased until the province reached a target population). Rather, they are fixed under the Constitution Act 1867 (in the case of Quebec), or are established upon the appointment of a senator and cease to exist when the senator leaves office (outside of Quebec).[1][2]

The Constitution also provides that a province cannot have fewer seats in the House of Commons than it has in the Senate. There are currently 105 seats in the Canadian Senate. Seats are divided among provinces and territories and can only change with a constitutional amendment, or a constitutional provision that allows seats to change based on certain conditions.[1] Beyond the constitutional allotment of Senate seats per province, the seats are grouped into four regions of 24 seats. Provisions under section 26 of the Constitution Act exist to add up to two extra seats per region, with no more than 113 members allowed to sit in the Senate.

Seats in the Canadian Senate chamber.

Senators have the same constitutional provisions to offer services as members of the House of Commons. This includes a rarely used provision to maintain a constituency office. Three senators currently have such offices. Two of the three have not designated themselves to a specific division, but to represent their province as a whole. While constituency offices are rare, all senators maintain an office on Parliament Hill. 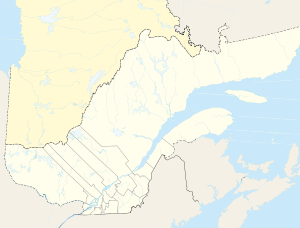 Map of the Quebec regional divisions

The Quebec regional division was created in 1867, at the time of Confederation. Quebec has had 24 seats since 1867. The region covers the entire province. Quebec is unique in each of its 24 senatorial designations are set out in the Constitution Act of 1867 and defined in the Consolidated Statutes of Canada 1859. These divisions are the same as those that Canada East held in the Legislative Council of Canada prior to Canadian confederation. The stated purpose of retaining the Senate divisions within Quebec is to protect the interests of religious and linguistic minorities inside the province.[2] Quebec senators must own property in their represented divisions.

An exception to the requirement for Quebec senators to represent a specific division occurs when the Prime Minister directly advises the Sovereign to temporarily expand the Senate under the Regional Expansion Clause in Section 26 of the British North America Act. This clause can be used to increase the Senate seats by 1 or 2 senators for each region, including Quebec. Prime Minister Brian Mulroney is to date the only one to successfully exercise this clause, on September 27, 1990. Under the clause, Senators Normand Grimard and Thérèse Lavoie-Roux represented self-designated divisions within Quebec following their appointments to the Senate. Senators appointed under Section 26 may name a senatorial designation of their own choosing in the same manner as a Senator from the other nine provinces and any such self-designation carries similar status.

Quebec’s Senate divisions have not changed since Confederation and remain based on the province’s 1867 boundaries. Although the territory of the Province of Quebec has expanded northward twice (in 1898 and 1912) the division boundaries were never changed to accommodate the boundary changes, thus leaving Northern Quebec unrepresented in the Senate. At the time, this was a relatively uncontroversial anomaly because the additional territory was primarily populated by First Nations peoples, who did not gain the right to vote until the 1960s.

*Narcisse-Fortunat Belleau declined appointment to the Senate and Stadacona Senate division. Ten senators have served out terms in Stadacona. 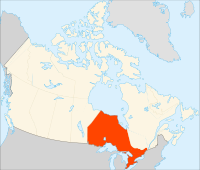 Map of the Ontario regional division

The Ontario regional division was created at the time of Confederation in 1867. The region covers the entire province and has not had any changes in seat numbers since 1867.

Ontario has been the most populous province and region in Canada since the birth of the country in 1867. The province has expanded its boundaries twice, to cover land once part of the Northwest Territories. Ontario also holds more seats in the House of Commons of Canada than any other province.

The capital of Canada, Ottawa is located within Ontario.

Prior to 1915 the provinces were not organized into a region, and had their own path of evolution. Manitoba gained seats on a set population expansion clause. Alberta and Saskatchewan gained seats from the Northwest Territories. British Columbia was given seats outlined in the Terms of Union.

Alberta has held popular elections for senators, although the Prime Minister is not obliged to nominate the winner of any such election to the Senate. Nonetheless, three winners of such elections have been nominated to the Senate: Senator Stan Waters was elected in the 1989 Alberta Senate nominee election, and Senators Bert Brown and Betty Unger were elected senators-in-waiting in 2004.

1 Senator Nicholas Taylor changed from Bon Accord to Sturgeon.

On June 5, 2006 New Brunswick Premier Bernard Lord announced his province’s support for possible Senate elections to be held during the New Brunswick municipal election cycle, joining Alberta as the only province actively pursuing elected senators. Among his proposal was a plan to divide New Brunswick into five regions or divisions and have each represented by two senators. Another possibility of the proposal was to have senators remain at large for the province. 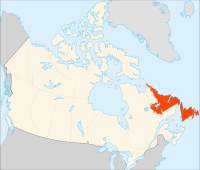 Map of Newfoundland and Labrador

The Yukon was created out of the Northwest Territories in 1898 but did not get representation in the Senate until it was granted one seat under the Constitution Act 1975.

Nunavut was granted one seat under the Nunavut Act 1993 when the territory was created out of the Northwest Territories in 1999.

Map of the Territories