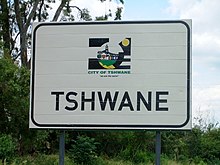 Tshwane sign, with the former logo depicting the Union Buildings in Pretoria, with slogan “We are the same” (photo 2005).

The City of Tshwane Metropolitan Municipality was established on 5 December 2000,[3] comprising 13 former city and town councils and managed under an executive mayoral system.

The Metsweding District Municipality was incorporated into the municipality[4] with effect from 18 May 2011 (the date of the 2011 municipal elections).

The Tswaing crater is in the northwest of Soshanguve.

The City of Tshwane Metropolitan Municipality consists of the following areas:[7]

The 2011 census divided the municipality into the following main places:[8]

The municipal council consists of 214 members elected by mixed-member proportional representation. 107 are elected by first-past-the-post voting in 107 wards, while the remaining 107 are chosen from party lists so that the total number of party representatives is proportional to the number of votes received. In the election of 1 November 2021, no party won a majority of seats on the council.

As of 2016, City of Tshwane receives 72% of its bulk water from Rand Water, which utilizes the Integrated Vaal River System. The remaining 28% of Tshwane’s water is sourced from its own treatment plants and boreholes. Water restrictions are implemented during drought, heat waves or other seasonal changes.

The main rail station is in Pretoria.

The Gautrain runs through parts of the municipality, with stations in Centurion and Pretoria, ending at a station in the suburb of Hatfield. 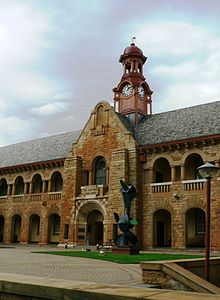 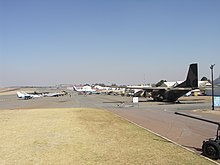 Thaba Tshwane military base (formerly called Voortrekkerhoogte and before that Roberts Heights) is in the municipality.

There are a large number of museums, many of them in Pretoria.

The city of Tshwane hosted the 10th World Choir Games, organised by the Interkultur Foundation, between 4–14 July 2018.[12] Various locations across the city were used as venues to host concerts and ceremonies for the event, including the Musaion and Aula theatres at the University of Pretoria, the ZK Matthews Great Hall at the University of South Africa, and the Pretoria State Theatre.[13] The event was the first of its kind on the African continent.[12]

The city is home to the Tshwane Suns who compete in South Africa’s highest basketball division, the Basketball National League.[14][15]

Logo of City of Tshwane depicting the Union Buildings in Pretoria, with slogan “We are the same”.

Tshwane [tsʰwane] is the Setswana/Sepedi name of the Apies River, which flows through the city. The origin of the name of the river is unclear. It may mean “place -e of the black cow, tshwana, from ceremonies where a black cow was sprinkled with water from the river to end a drought.[16] Another claim is that it was named after Tshwane, son of Chief Mushi, an Ndebele leader who settled near the Apies River about a century before the arrival of the Voortrekkers in the early 19th century.[16]

Two other common explanations are demonstrably untrue. One is that it is the Tswana for the motto of Tshwane Municipality, “We are the same”. However, this appears to be promoted for its emotional value; if anything, it would mean “we are not the same” in Tswana (ga re tshwane).[16] Another common misunderstanding is that it is the Tswana word for “little monkeys”; although it resembles the Tswana word for baboon, tshwene, “little monkeys” is actually the translation of the Afrikaans name “Apies”.[citation needed]

In 2005, politicians in the South African capital voted last night to rename the city Tshwane and retain the name Pretoria for the city centre only.
The Sunday Times used the word Tshwane to refer to the Pretoria area for a short period in 2005. The state-controlled SABC also started using the term in its evening news broadcasts, for a period, but by 2010, had reverted to “Pretoria”. Private media outlets continued to refer to the metropolitan area as Pretoria. The Pretoria News, the main newspaper in the metropolitan area did not appear to have plans to change its name as of early 2006, although it has adopted the slogan “The paper for the people of Tshwane”.[17]

On 21 May 2005, the Pretoria Civil Action Committee, a group consisting of business, labour, cultural, civil and political leaders opposed to the name change organised a protest in the Pretoria city centre.[18] They marched to the office of Arts and Culture Minister Pallo Jordan and handed him a petition signed by 3,000 University of Pretoria students as well as other petition documents. Former president FW De Klerk, a Nobel prize winner and the last president under apartheid, also raised concerns about the change.[19]

In November 2005, the Advertising Standards Authority found that advertising proclaiming that Tshwane, rather than Pretoria, was the capital of South Africa was misleading.[citation needed]

On 5 December 2000, a number of old Pretoria municipalities, as well as others that fell outside the Greater Pretoria area, were combined into one area called the City of Tshwane Metropolitan Municipality.[citation needed] The city of Pretoria remained largely intact in this municipality.[clarification needed] On 26 May 2005, the South African Geographical Names Council unanimously approved a recommendation by the Tshwane Metro Council that the name Pretoria be changed to Tshwane.[20]

The legal process involved is as follows:[citation needed]

Some groups attached themselves to the Pretoria name change issue, including the trade union Solidarity, which,[21] along with the Pretoria Civil Action Committee, threatened legal action should the name change be recommended by the minister. In early August 2007, it was reported in the press that the municipality, after consulting with the Gauteng provincial government had withdrawn the application to change the name, and was instead contemplating a plan to change all road signs pointing to “Pretoria” to “Tshwane” or the “City of Tshwane” across the country. This plan raised threats of legal action from both political groupings opposed to the renaming, and concerns from municipal officials about the possibility of vandalism to the proposed signs.[22][23]

In 2010, the Ministry of Arts and Culture prepared to publish the registration of Tshwane as a place name, in the Government Gazette. However, the registration was withdrawn at the last minute, which was explained by the minister.[clarification needed][why?] Although it was too late to remove the name from printing in the Government Gazette, the retraction of the name registration was published the following week in the gazette.[24] In November 2011, Kgosientso Ramokgopa, who had been elected mayor earlier that year, vowed to push forward with the renaming in 2012.[25]

As in other parts of the country, the Tshwane Metropolitan Municipality experiences high levels of corruption. Significant resources of the Special Investigation Unit (SIU) were dedicated to this region since 2010.[26][27][28] The screening of applicants for management positions has also been criticized.[29]

When, by November 2020, businesses and residents owed the metro R12 billion,[30] the metro outsourced its credit management to 34 debt collecting agencies after normal means were ineffectual. This was expected to increase the metro’s income levels, cash flow and capacity for service delivery. In 2021, its debt with Eskom stood at over R200 million, and the utility labeled it as a municipality with a poor payment record.[31]

In February 2022, its debtors book stood at R17 billion[32] and Tshwane implemented the Tshwane Yatima project to disconnect the power and/or water supply to 420 businesses, besides that of some state departments (Public Works and Infrastructure owing R355 million[33]) and embassies, SARS, the Navy and SAPS headquarters and Hatfield Gautrain station due to non-payment of their electricity or municipal accounts.[34][35] The University of Pretoria paid the bill of its Hillcrest campus under protest at the last minute.[32]