Map of Huntington branches, as of February 2021 (prior to merger with TCF Bank) 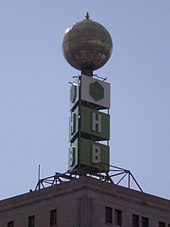 Huntington Bancshares Incorporated is an American bank holding company headquartered in Columbus, Ohio. The company is ranked 500th on the Fortune 500,[4] and is 35th on the list of largest banks in the United States.

The company’s banking subsidiary, The Huntington National Bank, operates 1047 banking offices, primarily in the Midwest: 459 in Ohio, 290 in Michigan, 80 in Minnesota, 51 in Pennsylvania, 45 in Indiana, 35 in Illinois, 32 in Colorado, 29 in West Virginia, 16 in Wisconsin and 10 in Kentucky.[5][6][2] In January 2009, the bank’s Board of Directors named Steve Steinour as president, CEO, and chairman, succeeding Thomas Hoaglan, who retired after eight years in those positions.[6]

The company is the second-largest originator of Small Business Administration loans.[7]

P. W. Huntington formed P. W. Huntington & Company in 1866, operating on the northwest corner of High and Broad Streets; the site now houses the regional headquarters for rival U.S. Bancorp. Huntington built its first five-story building in 1878, on the intersection’s southwest corner. Four out of five sons of P. W. would become partners during the 1890s and early 1900s. The bank was incorporated in 1905 as The Huntington National Bank of Columbus. Huntington died in 1918 shortly after turning the bank over to his sons.[10]

Francis Huntington became president and provided active leadership for 14 years. In 1915, the bank received limited trust powers. In 1922, the bank received full trust powers from the Federal Reserve System. In 1923, Huntington purchased Columbus-based the State Savings Bank & Trust Company and the Hayden-Clinton National Bank of Columbus, swelling its capital base.[12]

In 1975, the company changed its logo to its current “honeycomb” logo.

In 1980, Farmers & Merchants Bank, Milford Center and The First National Bank of Burton were merged with Huntington Bancshares.[12]

In 1981, the bank acquired Alexandria Bank Company and renamed it The Huntington State Bank, with a loan production office opening in Cincinnati.

In 1982, the bank merged with the Reeves Banking and Trust Company.[12] Huntington acquired the tiny Savings Bank of Chillicothe, Ohio in the early 1980s, which gained some fame in 2011 when 100-year-old June Gregg revealed to Huntington officials that her father had opened a savings account for her as a baby with Savings Bank in 1913 and that she had subsequently kept the account open. Huntington officials later confirmed it and gave her account a temporary increase in her interest rate to 5% as a centenarian present for her 98-year loyalty to Huntington and the Chillicothe branch’s predecessor, Savings Bank.[13]

In July 2007, the company acquired Sky Financial Group Inc. based in Bowling Green, Ohio, which increased its presence in Indiana and Ohio and expanded it into Western Pennsylvania for the first time.[23][24][25][26][27] As of 2021, Huntington is the sixth-largest bank in the Pittsburgh market by deposits.[28]

In November 2008, the United States Department of the Treasury invested $1.4 billion in the company as part of the Troubled Asset Relief Program and in December 2010, the company repaid the Treasury. The U.S. government made a profit of over $144 million from its investment in the company.[29][30][31][32]

On October 3, 2009, the Federal Deposit Insurance Corporation named Huntington as receiver of a $400 million deposit portfolio from the bank failure of Warren Bank in Warren, Michigan.[35][36][37]

In June 2011, three wordmarks and 2 icons were placed on the top of the 200 Public Square building in Cleveland, Ohio. The Building was formerly named the BP Building and was headquarters to SOHIO from 1985 to 2011, when the logo was put on the building.

In the first quarter of 2013, Huntington changed its ATMs to new ones that allow customers to make deposits by inserting cash and checks directly into the ATM.[47] The bank started in 2014 offering ATM deposits from mobile phones and through online transfers until 11:59 p.m. and post them that day.[48]

In September 2014, the company acquired 24 offices of Bank of America in Central Michigan, including the Port Huron, Flint, and Saginaw markets. This raised the number of Huntington branches in Michigan to 173, including over 40 locations housed in Meijer stores.[53][54][55]

In January 2016, Huntington announced it would purchase Akron-based FirstMerit Corporation for $3.4 billion, making the FirstMerit Tower in Akron, Ohio, have the Huntington word mark on it, and making it one of the largest banks in Ohio.[59] Due to Sherman Antitrust Act concerns by the United States Department of Justice, it sold 11 branches in Canton and two in Ashtabula to First Commonwealth Bank.[60] Additionally, 107 branches located within 2.5 miles of other Huntington / FirstMerit branches were closed.[61][62][63]

In 2012, Huntington started displaying old checks that were written by famous people, including 24 former U.S. Presidents such as Abraham Lincoln, George Washington, Thomas Jefferson, Andrew Jackson, Theodore Roosevelt, Franklin Roosevelt, and Niles, Ohio native William McKinley. Other checks were signed by Charles Dickens, Thomas Edison, Ernest Hemingway, and Susan B. Anthony, among others.[64] The most notable check was one written by Lincoln to “self” for $800 dated April 13, 1865, the day before his assassination.[65] The checks are estimated to be worth over $75,000 today. Huntington acquired the checks in 1983 when it purchased Union Commerce Bank and received several boxes of old documents, but weren’t discovered until 2011 when a Huntington employee was looking through the documents.[66]

On December 13, 2020, Huntington management announced a merger with Detroit-based TCF Bank.[68] Under the terms of the merger agreement, the bank will retain the Huntington name with commercial banking headquartered in Detroit and retail banking based in Columbus.[69] As part of the merger, the company also announced it would close 198 branches due to overlap. This includes all 97 branches located inside Meijer stores in Michigan.[70] Regulators announced on May 26, 2021 that TCF Bank would be required by the Department of Justice to sell 13 branches in Michigan. These branches were purchased by Horizon Bank at the end of the third quarter. The final approval has been given for the merger [71] and it was completed on June 9, 2021. The combined bank has $175 billion in assets.[2]

The combined bank will have two headquarters, Detroit for commercial banking and Columbus, Ohio for consumer banking. The merger allowed Huntington to enter Minnesota and Colorado for the first time. The merged bank will have 1,100 branches stretching from West Virginia to Colorado; its most important markets will be Columbus, Detroit, Minneapolis-St. Paul, and Chicago. TCF branches were converted in the fourth quarter of 2021.[72]

The Detroit office will be based in the TCF Building currently under construction in downtown Detroit, it will be renamed the Huntington Tower.[72] Originally the building was going to house Chemical Bank, which moved its headquarters from Midland, Michigan to Detroit in July 2018.[73] However, on August 1, 2019, the merger between Chemical Bank and TCF was completed with the merged company retaining the TCF name.[74] Now with the merger of TCF and Huntington the building will likely house 800 employees of the combined company.[75]

Huntington owns the naming rights to: