The construction of the railway station began on July 20, 2008 with a total investment of more than
CNY 15 billion ($2.3 billion). It was opened on July 1, 2010, simultaneously with the opening of the Shanghai–Nanjing intercity railway line. The railway station takes a total area of about 1.3 million square meters and has 16 platforms, most of which are high-speed-rail configuration.[1] The main building of the train station measures 420 meters in length, 200 meters in width, and 70 meters high (counting both underground and overground floors). 80,000 tons of steel was used to construct the train station, twice the amount of steel used to build the Beijing National Stadium (Bird nest). The train station waiting hall area is more than 10,000 square meters (107,639 square ft), and is capable of handling 10,000 passengers at the same time. The station serves 210,000 rail passengers per day.[2]

Hongqiao Railway Station of the Shanghai Metro is served by Lines 2, 10, and 17. It is also accessible by numerous bus lines and taxi.

A solar system of 20,000 solar panels, with a total area of 61,000 sq m, installed on the awnings of the station, has been described as “the world’s largest stand alone integrated photovoltaic (BIPV) project”. With the power output of 6.68 Megawatt, the system can produce 6.3 million kilowatt-hours (kwh) of electricity per year.[4] 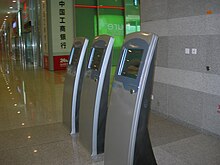 Automated ticket machines on Level B1.

Level B1, the underground level, contains the station exit and connections to other forms of transportation.

Arrivals at all 16 train platforms exit to this level. This level provides access to the Shanghai Metro’s Hongqiao Railway Station stop, which is the western terminus of the Main Line of Line 10 and is also served by Line 2 and Line 17. The bus stop and taxi stand are also on this level, and there is an air-conditioned passage to Terminal 2 of Shanghai Hongqiao International Airport, through which it takes about 20 minutes to walk to the airport.

The underground level also provides some fast food, such as KFC, Gongfu, Dongfang Jibai, and shopping, such as Sasa. There are three sets of Automated Ticket Machines and four sets of Ticket Windows.

Level 1 is where all 30 tracks running through the station are located. Most travellers simply transit through here to Level 2, the departure hall. All trains running on the Jinghu High-Speed Railway, Huhang High-Speed Railway, and the Huning Intercity Rail line wait outside of this level. A few vending machines are located near the escalators.

Level 2 contains 3 sets of ticket windows and the massive departure hall. All trains running on the Jinghu High-Speed Railway, Huning Intercity Rail, Huhang high-speed railway lines have their passengers wait in this level. There are also drink vending machines distributed throughout the level.

There are two unconnected parts of Level 3, one above Row A, and the other above Row B. Both offer fast food.