Tyler Robert Joseph (born December 1, 1988)[8] is an American rapper, singer, musician, and songwriter. He is best known as the frontman for the musical duo Twenty One Pilots, alongside bandmate Josh Dun. He also self-released a solo album titled No Phun Intended in 2008. As a member of Twenty One Pilots he has been nominated for six Grammy Awards, of which he has won one. He is characterized by his quirky personality and often dark, complex lyrical content within his songs.

Joseph was born in Columbus, Ohio and has two younger brothers, Zack and Jay Joseph (the latter of whom is also a musician), as well as one sister named Madison Brett. His mother, Kelly Joseph (née Stryker), was a math teacher in the Olentangy school district[9] before being named Olentangy Orange High School’s basketball coach in 2013.[10] His father, Christopher Anthony “Chris” Joseph, is of Lebanese descent[11] and was a coach at Worthington Christian High School from 1996 to 2005,[10] as well as being a former school principal.

Joseph played basketball from a very young age[12] and went on to play point guard for Worthington Christian.[13][14] In 2008, the varsity basketball team placed second in the Division IV state tournament.[9] Future Twenty One Pilots bassist Nick Thomas also played on the same team with Joseph, the pair having performed “The Star-Spangled Banner” together at one of their games.[15][16]

In 2007, Joseph began uploading short comedic skits and videos to a YouTube channel named “slushieguys”.[17] The channel currently has over 126 thousand subscribers as of August 2021, although the channel hasn’t uploaded any content since 2013.

After seeing a songwriter perform at a High Street club, he rejected an opportunity to play basketball at Otterbein University, along with a scholarship to the university.[9][12] He began playing music after finding an old keyboard in his closet, a Christmas gift from his mother, and began to mimick various radio melodies.[9][18][19] From around 2007 to 2008, Joseph recorded a solo album titled No Phun Intended in his basement. It was later revealed that Thomas contributed guitar to several songs on the album.[20]

Among Joseph’s first performances with Twenty One Pilots, he recounts that his mother would often stand outside of Ohio State University giving away tickets to his shows. “She’d be like, ‘Come see my son play music'”, Joseph says.[21]

Joseph performing with Twenty One Pilots in 2014

Twenty One Pilots was formed in 2009 in Columbus, Ohio and consisted of frontman Tyler Joseph, bassist Nick Thomas and drummer Chris Salih; the latter two left the band in 2011.[22][23][9]

On December 29, 2009, they released their debut, self-titled album and began touring Ohio, followed by their second album, Regional at Best in 2011, which consisted only of Joseph and drummer Josh Dun.[24]

Twenty One Pilots’ third full-length album, Vessel, was released on January 8, 2013.[24][25] They also embarked on a tour in support of the album, in which they named the “Quiet Is Violent World Tour”.[26] 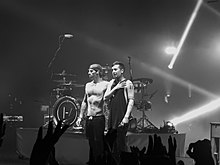 On March 17, 2015, the band announced their fourth album’s title, Blurryface, and unveiled its track listing and release date.[27] The band’s fans crashed their website attempting to pre-order the album.[28] The band released their new single “Fairly Local” on the same day accompanied by its music video which premiered on the official Fueled by Ramen YouTube channel.[29] The album was released on May 17, 2015, two days ahead of its intended release date.[30] Joseph and drummer Josh Dun embarked on two international tours in 2015 and 2016: the Blurryface Tour and Emotional Roadshow World Tour.[31]

At the 59th Annual Grammy Awards, the duo won the award for Best Pop Duo/Group Performance.[32][33][34] On July 11, 2018, the band announced the release date of their fifth studio album, Trench, which was released on October 5, 2018. A world tour, called The Bandito Tour, began on October 16, 2018, as well. On July 25, 2018, a music video for the song “Nico and the Niners” was released, as a second addition to a three part music video series, regarding Tyler Joseph’s fictional city, “Dema”. Both videos feature references to “Heavydirtysoul”, a single off of the band’s previous album, such as the repeated imagery of a burning car. The lyrics of “Nico and the Niners” also refer to “bishops”, which is a recurring theme in the band’s music.[35][36][37][38][39] A 10-second snippet of the song “My Blood” was played at the end of a commercial for Trench during the 2018 VMAs on August 20.[40] On August 27, 2018, a Twitter user leaked the full song onto his Twitter account in low quality, after they found that it could be played on their Apple HomePod.[41] The leak was confirmed real when the band made the song available on streaming services later that day as the album’s fourth single.[42] The audio was uploaded onto YouTube on the same day, which shows singer Tyler Joseph in his home studio playing the song’s bass line.[43] A music video for the song was released on October 5, 2018, the day of the album’s release.

On January 22, 2019, the music video for “Chlorine” was uploaded to YouTube upon the song’s release as a single and was directed by Mark C. Eshleman of Reel Bear Media, featuring a small, alien-like creature named “Ned”, created by Joseph.[44]

On April 9, 2020, the band released a new single “Level of Concern”.[45][46] The song’s lyrics reference the anxiety during the COVID-19 pandemic, also, the accompanying music video for the track was filmed in Joseph and Dun’s homes while they were under lockdown due to the U.S. state and local government responses to the COVID-19 pandemic. Joseph directed a portion of the song’s proceeds to Crew Nation, a charity for live music crews who cannot be paid during the international quarantine.[47]

On December 8, 2020, Twenty One Pilots released a Christmas song, titled “Christmas Saves the Year”, during a Twitch livestream hosted by Joseph.[48][49][50] Originally, Joseph was reluctant to write a Christmas song, although he said that he was inspired by the fact he was “experiencing Christmas through a little girl’s perspective.” The sound of the track was inspired by a musical instrument called the Mellotron.[51]

Tyler Joseph had a solo project before starting Twenty One Pilots where he released a full-length album titled No Phun Intended. The release was available for listening purposes on his PureVolume account until 2018, when the music service shut down.[56] The album was recorded in Joseph’s senior year of high school, from 2007 to 2008, in his basement.[57] The song “Save”, off the release, was redone and released as a free download for some time on Twenty One Pilots’ official website before it was then pulled.[58] A song titled “Whisper” from his solo career has also been released on the Internet.[59][60]

In 2010, Joseph was featured in the song “Live” by the hip hop artist and rapper Joseph Michael Langston (better known by his stage name Jocef, or sometimes as Jocef Michael), who is a friend of Joseph’s from college, along with two other rappers, Juda and Alon. The song is the opening track to Jocef’s debut album, In Search of: L.O.V.E.[61][62] The track was co-written by Tyler Joseph and Jocef.[63] Jocef eventually returned the favor a year later by being featured on the song “Be Concerned” off of Twenty One Pilots’ 2011 album Regional at Best.[64]

In 2011, Joseph was also the lead star in Five14 Church’s three episode mockumentary titled “The (moderately inspiring tale of the) Longboard Rodeo Tango”.[65][66][67] According to the mockumentary, Joseph was an intern at the church at the time.

In 2012, Joseph was featured in an internet-use awareness video titled Where Are You? by Mark C. Eshleman (the producer and director of many Twenty One Pilots music videos) for an annual contest put on by Trend Micro, called What’s Your Story?[68][69] The room used in the video is the same room in which the original music video for “House of Gold” was filmed.[70]

On December 24, 2013, Christmas Eve, Joseph participated and sang “O Come, O Come, Emmanuel” at Five14 Church’s Christmas With the Stars in New Albany, Ohio. The official video of the performance was uploaded to YouTube on February 14, 2014.[71] He also performed a magic segment with the church’s host and emcee David McCreary for the show.[72][73]

In December 2014, Joseph contributed backing vocals to the song “Sickly Sweet Holidays” by Dallon Weekes (then-bassist of Panic! at the Disco).[76][77] Joseph initially had an entire verse in the song, but it was excluded due to Joseph’s label.[78]

Joseph was homeschooled in his childhood.[12] His first real exposure to music was the Christian rap rock group DC Talk.[79] In regards to religion, Joseph said:

Joseph has a three-part tattoo that represents “something that saved his life”.[81] Though it is assumed it deals with his Christian faith, Joseph has been specific about the fact that he does not want the meaning of his tattoos spread across the internet.[82] However, he has stated a few times that he is willing to tell people one-on-one if they decide to ask him in person.[81] They received it on stage during their hometown show at the Lifestyle Communities Pavilion on April 26, 2013.[83][84] Joseph’s is located on his right bicep and Dun’s is located on his neck behind his right ear.[85] Joseph is a fan of the intercollegiate athletic collective, the Ohio State Buckeyes.[86]

Joseph is a supporter of the Black Lives Matter movement.[89] He is also an ally of the LGBT+ community.[90]

Before assembling the band Twenty One Pilots, Tyler Joseph recorded the self-released No Phun Intended album in his basement between 2007 and 2008, during Joseph’s senior year of high school. The songs recorded during Joseph’s solo-career are nonetheless celebrated and have made several appearances in the band’s future projects. It was later revealed that aside from Joseph, Nick Thomas also contributed guitar to several of the songs on the record.

Although not on the album, the song “Going Down” and an untitled demo surfaced on the Internet on July 2, 2018.