The company was established in 1993, after the dissolution of Czechoslovakia, as a successor of the Czechoslovak State Railways. It is a member of the International Railway Union (UIC Country Code for the Czech Republic is 54), Community of European Railways and the Organization for Railway Cooperation (Asia and Europe). With twenty-four thousand employees[2] ČD Group is the fifth largest Czech company by the number of employees.[3]

Until 1 July 2008, České dráhy was the biggest employer in the Czech Republic.[4] After experiencing regular losses and requiring government subsidy,[5] the railway reported its first ever profit in 2007[6] while still receiving government subsidy.[7] Attempts to make it more efficient are currently ongoing and a recent plan to move passenger transport to an independent subsidiary was approved by the Czech government in January 2008.[8]

ČD operates trains; fixed infrastructure (such as tracks) is managed by SŽDC. In December 2010, the Czech government proposed bringing SŽDC and ČD together in a single holding company. The government has also changed the subsidy available to ČD and SŽDC.[7]

In 2014 Pavel Krtek was elected chairman of the board of directors.

In 2019 the supervisory board of Czech Railways dismissed Miroslav Kupec, chairman of the board of directors, who has been in office since September 2018.[9] 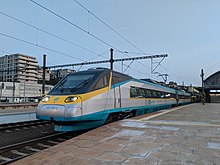 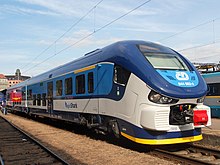 České dráhy is the result of more than 160 years of railway history in the Czech lands. Historic milestones include:

ČD Cargo, the cargo subsidiary, mainly transports raw materials, intermediate goods and containers. As of 2009, it is ranked in the top five largest railway cargo operators in Europe.[15]