It also supported or worked closely with the following authorities:

The total reportable visitation to DEC-managed lands and waters during the 2012-13 financial year was 16.02 million, with visitor satisfaction levels of 88%.

4,717 people were registered volunteers with the Department in 2012-13 that helped in a range of projects across the state with 564,350 hours contributed. 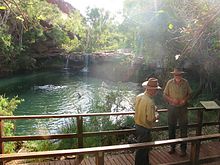 DEC was responsible from 2007 to 2013 for protecting and conserving the state of Western Australia’s environment; this included managing:

The department’s key responsibilities also included roles in managing, regulating and assessing aspects of the use of the State’s natural resources and biodiversity, including the regulation of native vegetation clearing and pollution control. The department initiated 14 environmental prosecutions during 2012–13, involving a broad range of charges including pollution, unauthorised clearing of native vegetation and illegal dumping. At 30 June 2013, eight environmental prosecutions remained before the courts. There were an additional 18 pending cases that, subject to the evidentiary standard being met, could result in prosecution or other sanction.

Air Tractor 602 water bomber, based in Albany on reloading at Esperance airport in November 2009

The combination of unsuitable weather conditions, fuels remaining dry due to summer conditions extending into autumn, and enhanced requirements in prescribed burn planning and risk management as a result of the 2011 Margaret River bushfire contributed to a significant reduction of the area able to be prescribed burnt this year.

The average area of burning achieved over the past 10 years has been about 163,019 hectares per annum.

A further 6,023,884 hectares was burnt in the Kimberley, Pilbara, Goldfields, Midwest, Wheatbelt and South Coast regions. The burns were carried out on DEC-managed lands as well as on unallocated Crown lands and unmanaged reserves within these regions.

DEC staff attended and monitored 676 bushfires throughout the state in 2012–13, which burnt about 5,477,394 hectares. The causes of these fires were:

Some of the most severe bushfires the Department had to suppress, in chronological order, included:

National parks (and the earlier forms) in Western Australia were under:[7]

The Department maintained and coordinated a range of specialist equipment and emergency response vehicles. This included pumpers, water bombers and tankers and other equipment relating to operations involving search and rescue and firefighting.