Melanin-producing cells of the skin

Melanocytes are melanin-producing neural crest-derived[3]cells located in the bottom layer (the stratum basale) of the skin’s epidermis, the middle layer of the eye (the uvea),[4] the inner ear,[5]vaginal epithelium,[6]meninges,[7]bones,[8] and heart.[9] Melanin is a dark pigment primarily responsible for skin color. Once synthesized, melanin is contained in special organelles called melanosomes which can be transported to nearby keratinocytes to induce pigmentation. Thus darker skin tones have more melanosomes present than lighter skin tones. Functionally, melanin serves as protection against UV radiation. Melanocytes also have a role in the immune system. 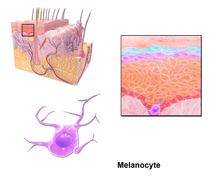 Illustration of a melanocyte 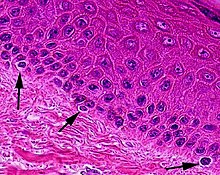 Micrograph of melanocytes in the epidermis

Through a process called melanogenesis, melanocytes produce melanin, which is a pigment found in the skin, eyes, hair, nasal cavity, and inner ear. This melanogenesis leads to a long-lasting pigmentation, which is in contrast to the pigmentation that originates from oxidation of already-existing melanin.

Typically, between 1000 and 2000 melanocytes are found per square millimeter of skin or approximately 5% to 10% of the cells in the basal layer of epidermis. Although their size can vary, melanocytes are typically 7 μm in length.

The difference in skin color between lightly and darkly pigmented individuals is due not to the number (quantity) of melanocytes in their skin, but to the melanocytes’ level of activity (quantity and relative amounts of eumelanin and pheomelanin). This process is under hormonal control, including the MSH and ACTH peptides that are produced from the precursor proopiomelanocortin.

Vitiligo is a skin disease where people suffer from melanin lack in certain areas in the skin.

People with oculocutaneous albinism typically have a very low level of melanin production. Albinism is often but not always related to the TYR gene coding the tyrosinase enzyme. Tyrosinase is required for melanocytes to produce melanin from the amino acid tyrosine.[12] Albinism may be caused by a number of other genes as well, like OCA2,[13]SLC45A2,[14]TYRP1,[15] and HPS1[16] to name some. In all, already 17 types of oculocutaneous albinism have been recognized.[17]
Each gene is related to different protein having a role in pigment production.

People with Chédiak–Higashi syndrome have a buildup of melanin granules due to abnormal function of microtubules.

Role in the immune system[edit]

Melanocytes are capable of expressing MHC Class II,[19] a type of MHC expressed only by certain antigen presenting cells of the immune system, when stimulated by interactions with antigen or cytokines. All cells in any given vertebrate express MHC, but most cells only express MHC class I. The other class of MHC, Class II, is found only on “professional” antigen presenting cells such as dendritic cells, macrophages, B cells, and melanocytes. Importantly, melanocytes stimulated by cytokines express surface proteins such as CD40 and ICAM1 in addition to MHC class II, allowing for co-stimulation of T cells.[18]

In addition to presenting antigen, one of the roles of melanocytes in the immune response is cytokine production.[21] Melanocytes express many proinflammatory cytokines including IL-1, IL-3, IL-6, IL-8, TNF-α, and TGF-β.[18][19] Like other immune cells, melanocytes secrete these cytokines in response to activation of Pattern Recognition Receptors (PRRs) such as Toll Like Receptor 4 (TLR4) which recognize MAMPs. MAMPs, also known as PAMPs, are microbial associated molecular patterns, small molecular elements such as proteins, carbohydrates, and lipids present on or in a given pathogen. In addition, cytokine production by melanocytes can be triggered by cytokines secreted by other nearby immune cells.[18]

Melanocytes are ideally positioned in the epidermis to be sentinels against harmful pathogens. Melanocytes reside in the stratum basale,[21] the lowest layer of the epidermis, but they use their dendrites to interact with cells in other layers,[22] and to capture pathogens that enter the epidermis.[19] Melanocytes likely work in concert with both keratinocytes and Langerhans cells,[18][19] both of which are also actively phagocytic,[21] to contribute to the immune response.

Tyrosine is the non-essential amino acid precursor of melanin. Tyrosine is converted to dihydroxyphenylalanine (DOPA) via the enzyme tyrosinase. Then DOPA is polymerized into melanin. The copper-ion based enzyme-catalyzed oxidative transformation of catechol derivative dopa to light absorbing
dopaquinone to indole-5,6-qionone is clearly seen following the polymerization to melanin, the color of the pigment ranges from red to dark brown.

Numerous stimuli are able to alter melanogenesis, or the production of melanin by cultured melanocytes, although the method by which it works is not fully understood. Certain melanocortins have been shown in laboratory testing to have effect on appetite and sexual activity in mice.[23]Eicosanoids, retinoids, oestrogens, melanocyte-stimulating hormone, endothelins, psoralens, hydantoin, forskolin, cholera toxin, isobutylmethylxanthine, diacylglycerol analogues, and UV irradiation all trigger melanogenesis and, in turn, pigmentation.[24] Increased melanin production is seen in conditions where adrenocorticotropic hormone (ACTH) is elevated, such as Addison’s and Cushing’s disease. This is mainly a consequence of alpha-MSH being secreted along with the hormone associated with reproductive tendencies in primates. Alpha-MSH is a cleavage product of ACTH that has an equal affinity for the MC1 receptor on melanocytes as ACTH.[25]

Melanosomes are vesicles that package the chemical inside a plasma membrane. The melanosomes are organized as a cap protecting the nucleus of the keratinocyte.
When ultraviolet rays penetrate the skin and damage DNA, thymidine dinucleotide (pTpT) fragments from damaged DNA will trigger melanogenesis[26] and cause the melanocyte to produce melanosomes, which are then transferred by dendrites to the top layer of keratinocytes.