New Marlborough was established as one of the four townships opened along the road between Sheffield and Westfield. The land was purchased from the local Native Americans (a band of Mohican Indians) by 72 proprietors from Marlborough, Massachusetts and vicinity, and the deed to the land was certified by the General Court in Boston in 1736. Most of the land was divided into 60-acre parcels for settlement, which started in 1739 and proceeded quickly during the 1740s. The town was officially incorporated in 1775, and named after the home town of the original proprietors.[2] The town grew as a combination of agriculture in the area around the town center, and mills along the rivers in town. Today it is mostly rural, with little to no industry.

New Marlborough is located in the lower Berkshires, dotted by several peaks. Several rivers, including the Konkapot River, Umpachene River, and Whiting River, flow through the town, all of which feed into the Housatonic River. There are also several swamps and ponds, including Lake Buel on the Monterey line, and the Thousand Acre Swamp in the southeast corner. The swamp lies along the border of Campbells Falls State Park, named for the falls along the Whiting River. Parts of Sandisfield State Forest also lie in the town.

There were 582 households, out of which 28.5% had children under the age of 18 living with them, 58.1% were married couples living together, 6.5% had a female householder with no husband present, and 30.6% were non-families. 25.1% of all households were made up of individuals, and 8.8% had someone living alone who was 65 years of age or older. The average household size was 2.42 and the average family size was 2.88. 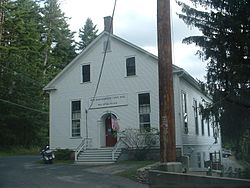 New Marlborough employs the open town meeting form of government, and is led by a board of selectmen and an executive assistant. The town has its own police, fire and public works departments. The town library, located in Mill River, is connected to the regional library network, and the town has two post offices, in Mill River and Southfield. The nearest hospital, Fairview Hospital, is in neighboring Great Barrington.

New Marlborough is part of the Mount Everett Regional School District along with Alford, Egremont, Monterey, Mount Washington, and Sheffield. Students in New Marlborough attend the New Marlborough Central School for kindergarten and first grades, with second through sixth grades attending the Undermountain Elementary School in Sheffield, and Mount Everett Regional High School in Sheffield for grades 7–12. Additionally, there are private schools in Sheffield, Great Barrington and Salisbury, Connecticut..[17] There are private schools in Great Barrington and other nearby towns.