The nictitating membrane is a transparent or translucent third eyelid present in some animals that can be drawn across the eye for protection and to moisten it while maintaining vision. The term comes from the Latin word nictare, meaning “to blink”. It is often called a third eyelid or haw, and may be referred to in scientific terminology as the plica semilunaris, membrana nictitans, or palpebra tertia. Unlike the upper and lower eyelids, the nictitating membrane moves horizontally across the eyeball.

Third eyelid on a domestic dog

In many species, any stimulus to the eyeball (such as a puff of air) will result in reflex nictitating membrane response. This reflex is widely used as the basis for experiments on classical conditioning in rabbits.[2] 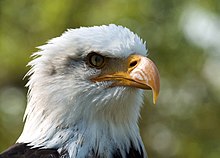 The nictitating membrane (mid-blink) of a bald eagle 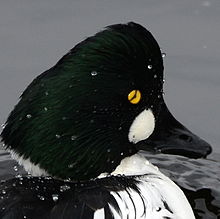 The nictitating membrane is normally translucent. In some diving animals, including sea lions, it is activated on land, to remove sand and other debris—its function in most animals. In crocodiles, it protects their eyes from water but also hinders their focus under water. In some diving animals, for example beavers and manatees, it is transparent and moves across the eye to protect it while under water.

The nictitating membrane can be used to protect the eye while attacking prey, as in sharks.

It can also protect the eye from ultraviolet radiation, similar to its role in polar bears to prevent snow blindness. 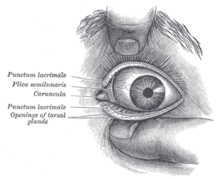 Nictitating membranes in cats and dogs do not have many muscle fibers, so they are not usually visible; chronic visibility should be taken as a sign of poor condition or ill health. The membrane can, however, be seen clearly when gently opening the eye of the healthy animal when it is asleep, or by pushing down/applying pressure on the eyeball, which will cause it to appear. In some breeds of dogs, the nictitating membrane can be prone to prolapse of the gland of the third eyelid, resulting in a condition called cherry eye.[8]