Skip to content
This article is about the Valencian confection. For the Filipino banana spring roll, see Turon (food).

Turrón (Spanish: [tuˈron]), or torrone (Italian: [torˈroːne]), is a southwestern European nougat confection, typically made of honey, sugar, and egg white, with toasted almonds or other nuts, and usually shaped into either a rectangular tablet or a round cake. It is frequently consumed as a traditional Christmas dessert in Spain, Portugal, and Italy as well as countries formerly under the Spanish Empire and Portuguese Empire, particularly in Latin America.

The 16th-century Manual de Mujeres (Women’s handbook), a handbook of recipes for cosmetics and some foodstuffs, has what is probably the oldest extant Spanish turrón recipe.[1] It calls for honey and some egg whites, cooked until it becomes breakable once cooled. Once the honey is caramelized the recipe suggests adding pine nuts, almonds or hazelnuts, peeled and roasted. The mix is then cooked a bit further, and finally removed from the heat and cut into slices.

All versions of the name appear to have been derived from Latin torrere (to toast). The modern confection might be derived from the Muslim recipe prevalent in parts of Islamic Spain known as turun,[2] or even from an ancient Greek recipe.[2] One may also point to a similar confection named cupedia or cupeto that was marketed in Ancient Rome and noted by Roman poets.[3][4]

Turrón or Torró has been known at least since the 15th century in the city of Jijona/Xixona (formerly Sexona), north of Alicante. Turrón is commonly consumed in most of Spain, some countries of Latin America, and in Roussillon (France). The similar Torrone is typical of Cremona and Benevento in Italy. There are similar confections made in the Philippines.

Variations are found in several regions of the northern Mediterranean.

Turrón itself can take on a variety of consistencies and appearances, however, they traditionally consisted of the same ingredients; the final product may be either hard and crunchy, or soft and chewy. Thirty years ago almost all turrón recipes followed the same specifications, but since the diversification of products there are currently dozens of varieties: chocolate with puffed rice or whole almonds; all kinds of chocolate pralines, with or without liquor, candied fruits or whole nuts; fruit pralines; and even sugarless variations (sweetened with fructose or artificial sweeteners).

Traditional Spanish turrón may be classified as:

This variation in ingredients and resulting dryness reflects a continuum that exists also in amaretto (almond-flavored) cookies, from a meringue to a macaroon.

Other varieties include Torró d’Agramunt from near Lleida, Torró de Xerta from near Tortosa and torró de Casinos.

Modernly the name turrón has widened its meaning in Spain to include many other sweet preparations that have in common with traditional turrón being sold in bars of around 20 x 10 x 3 cm. These bars can feature chocolate, marzipan, coconut, caramel, candied fruit, etc. 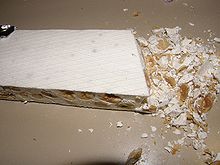 Torrone is a traditional winter and Christmas confection in Italy and many varieties exist. They differ from the Spanish version in that a lower proportion of nuts is used in the confection. Traditional versions from Cremona, Lombardy, range widely in texture (morbido, soft and chewy, to duro, hard and brittle) and in flavor (with various citrus flavorings, vanilla, etc., added to the nougat) and may contain whole hazelnuts, almonds and pistachios or only have nut meal added to the nougat. Some commercial versions are dipped in chocolate. The popular recipes have varied with time and differ from one region to the next. Torrone di Benevento from Benevento, Campania, sometimes goes by the historic name Cupedia, which signifies the crumbly version made with hazelnuts. The softer version is made with almonds. The Torrone di Benevento is considered to be the oldest of its kind since it predates Roman times and was widely known in the territories of Samnium.[6][7][unreliable source?] Although originally resembling sticky paste, it now differs only marginally from the varieties of Torrone di Cremona.[8][9] Abruzzo, Sicily and Sardinia also have local versions that may be slightly distinct from the two main denominations from Lombardy and Campania.[10] 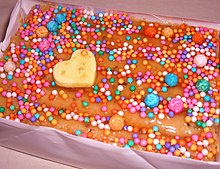 In Peruvian cuisine turrón generally is soft and may be flavored with anise. The original Spanish recipe, which contained ingredients that were rare or expensive in Peru (such as almonds, rose water, orange blossom water, honey), was modified in a variety of ways. One common variety found in Lima is Turrón de Doña Pepa, an anise and honey nougat that is traditionally prepared for the Señor de los Milagros (or Lord of Miracles) religious procession, during October.

Filipino turón de mani, a type of dessert lumpia made of ground peanuts in a spring roll wrapper

Cashew turrón (Philippine Spanish: turrones de casúy; Spanish: turrones de anacardo) from Pampanga Province is a derivative. It is a bar of marzipan made with cashew nuts, and wrapped in a white wafer. Unlike in the rest of Hispanidad, this candy is not associated with the holiday season. Another derivative is the turrones de pili, made using the native pili nut.

A similar delicacy is the masareal of Mandaue, Cebu which is made from finely-ground boiled peanuts, sugar or syrup (latik), and water. It is typically not as dry as the turrón, however.[11][12][13][14]

A derivative but very different street food is the turón, which is a dessert version of the Filipino lumpia. The most common is the turón na saging, which are sliced banana or plantain dipped in brown sugar, wrapped in spring roll wrappers, and deep-fried. However, there are numerous other fillings of turón, including ube, sweet potato, and even peanuts, like the turón de mani.[15][16][17]

In Cuba, turrón de maní (peanut nougat) is a traditional sweet treat. Snack-sized bars are usually peddled across bus stops and crowds, though family loaves of up to two pounds are also available. They run in two variants: blando, ground peanuts pressed into bars with brown sugar; and duro, coarsely chopped roasted peanuts bound together with caramelized sugar and honey.

Various types of Turrón/Torrone that have protected geographical status under EU law include:

Others, such as Torrone di Cremona (Italy) have protected status by (but not limited to) the country that produces it.