Fuzhou Changle International Airport (IATA: FOC, ICAO: ZSFZ) is an international airport serving Fuzhou, the capital of Fujian province, China. The airport was inaugurated on June 23, 1997, after being approved to start constructing in 1992. The current handling capacity is approximately 6.5 million people annually.

The airport is located near the shore of the Taiwan Strait in Zhanggang Subdistrict, Changle, about 50 km (31 mi) east of central Fuzhou. The airport is also a major hub for the namesake Fuzhou Airlines and XiamenAir.

In 2017, Fuzhou Airport handled 12,469,235 passengers and was 29th busiest in China by total passenger traffic. In 2016 the airport was the 23rd busiest airport in terms of cargo traffic and the 28th busiest airport by traffic movements.[1]

Changle Airport was built to replace the old Fuzhou Yixu Airport (福州义序机场),[2] a dual-use military and civil airport located in Cangshan District, and prepared for the base of the direct flights to Taiwan across the straits.[citation needed] The airport was designed by Singaporean RSP Architects Planners & Engineers Pte Ltd. The government of Fujian province hoped that the new airport could reach the standard of Singapore Changi Airport, but they soon realized it was too big, and shrank the scale of the airport. However, the scale of the airport was still much bigger than the norm that central government approved. Changle Airport was opened in 1997. Due to the lack of Passenger flow, the airport had a great deficit in early years of operation. In 2003, the management of the airport was taken over by Xiamen International Airport Group, and began profiting from 2005.

In February 2017, Xiamen Airlines operated Changle’s first direct route to North America, with a Boeing 787-9 service to New York–JFK airport.[3] On 11 December 2018, a second intercontinental route to Paris was launched.[4]

The airport targets 36 million passengers and 450,000 tonnes cargo per year by 2030 upon project completion.[5]

Fuzhou Changle International Airport is located at 25°56´ north latitude and 119°39´ east longitude. It is surrounded by the sea on three sides. The surrounding area of the airport is flat, but it extends southwest and northeast, surrounded by mountains.

There is a taxi waiting at the exit of the arrival hall. The city’s unified price starts at 10 yuan / 3 kilometers, and 2 yuan per kilometer thereafter.

The airport passenger terminal has a number of fixed shuttle routes to Fuzhou city and surrounding areas, opening hours from 4:30-22:30.[6]

There are many expressways that can directly reach Changle International Airport, such as Shenhai Expressway, Fuyin Expressway, and Airport Expressway.[7]

According to the newly released intercity railway construction plan for the west coast of Fujian Province, the Fuzhou-Changle Airport Intercity Railway (F1/3) will be directly connected to the airport, and will be passed by Metro Line 6 near the airport.[8]

Fuzhou Changle International Airport has a subtropical maritime climate, with the northeast monsoon prevailing in the winter half year and the southwest monsoon in the summer half year. There will be continuous rainy weather in spring. Due to typhoon and subtropical high pressure, there are often strong winds and heavy rains in summer. There will be continuously sunny weather in winter. 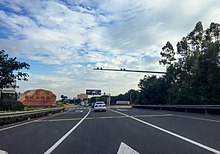 “Welcome back to the Land of Blessings” (福地再相聚), the sign reads, indicating the airport is right ahead.

Aviation and weather are closely connected. Thunderstorms are currently recognized as one of the most important weather phenomena that seriously affect the safety of airport and efficiency of flights.[36] When flying in thunderstorms area, passengers and crew may encounter dangerous weather such as wind shear, bumps, hail, downburst, etc.

Compared to other months of the year, the thunderstorms in June showed the highest number, with an average of 5.1d. Most are dry thunderstorms and are not prone to rainfall.

Thunder mainly concentrated in the afternoon to the middle of the night, with the highest frequency occurring at 17: 00.

Thunderstorms may occur in all directions of Fuzhou Airport, among them, west direction has highest frequency, followed by the northwest and southwest directions. This is because the eastern part of the airport is the ocean, the west is the mountainous area, and the convection over the mountains is stronger than the ocean.[10]

The average visibility in the first half of the year is less than 1000 meters. The number of days is significantly higher than that in the second half, accounting for 83% of the whole year. The visibility of the airport has obvious seasonal differences, showing the worst visibility in spring.[37]