The western grey kangaroo (Macropus fuliginosus), also referred to as a western grey giant kangaroo, black-faced kangaroo, mallee kangaroo, and sooty kangaroo,[4] is a large and very common kangaroo found across almost the entire southern part of Australia, from just south of Shark Bay through coastal Western Australia and South Australia, into western Victoria, and in the entire Murray–Darling basin in New South Wales and Queensland.

Long known to the Aboriginal Australians, for Europeans, the western grey kangaroo was the centre of a great deal of sometimes comical taxonomic confusion for almost 200 years. It was first noted by European explorers when Matthew Flinders landed on Kangaroo Island in 1802.[5] Flinders shot several for food, but assumed that they were eastern grey kangaroos. In 1803, French explorers captured several Kangaroo Island western grey kangaroos and shipped them to Paris, where they lived in the Ménagerie du Jardin des Plantes for some years. Eventually, researchers at the Paris Museum of Natural History recognized that these animals were indeed distinct from the eastern grey kangaroo and formally described the species as Macropus fuliginosus in 1817. For reasons that remain unclear, the species was incorrectly described as native to Tasmania.[6]

There the matter rested for over 100 years, and it was not until 1917 that researchers realized that the “forester kangaroo” of Tasmania was in fact Macropus giganteus, the same eastern grey kangaroo that was, and still is, widespread in the southeastern part of the mainland.[citation needed] By 1971, it was understood that the Kangaroo Island western grey kangaroo belonged to the same species as the kangaroos of southern and Western Australia, and that this population extended through much of the eastern part of the continent as well (see range map). For a time, three subspecies were described, two on the mainland and one on Kangaroo Island. The current classification scheme emerged in the 1990s.[citation needed]

The western grey kangaroo is not found in the north or the far southeast of Australia, and the eastern grey does not extend beyond the New South Wales–South Australia border, but the two species are both common in the Murray–Darling basin area. They never interbreed in the wild, although it has proved possible to produce hybrids between eastern grey females and western grey males in captivity.

There are two subspecies: 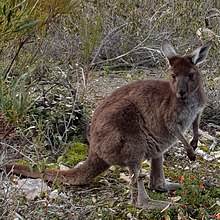 It feeds at night, mainly on grasses but also on leafy shrubs and low trees. It has a nickname “stinker” because mature males have a distinctive curry-like odour.[10] 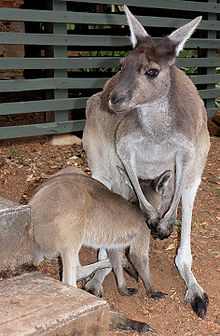 The western grey kangaroo lives in groups of up to 15. The males compete for females during the breeding season.[11] During these “boxing” contests, they lock arms and try to push each other over. Usually, only the dominant male in the group mates.[8] The gestation period is 30–31 days, after which the incompletely developed fetus (referred to as a joey) attaches to the teat in the pouch for 130–150 days.[8]
Females sexually mature at 17 months while males mature at around 20 months.[11]

The western grey kangaroo is classified as Least Concern by the IUCN Red List, with a population showing an increasing trend.[2][13] Total population within the commercial harvest areas is estimated to 2,348,393 individuals.[14]

Though the feeding habits of M. fuliginosus can be problematic for agriculture, it is protected and controlled exclusively by the state faunal authorities.[11] Because it is considered a competitor for water and pasture by ranchers, this species is considered a pest in some areas. To limit agricultural damage, kangaroo culling has been allowed under license every year.[13]

Commercial hunting for meat and skin also allowed under regulation, with skins providing a high-quality, long-lasting leather. About 40% of harvested meat is used for human consumption; leather is used as a material for handbags, briefcases, and belts.[13]