The British Rail Class 377 Electrostar is a British dual-voltage electric multiple-unit passenger train (EMU) built by Bombardier Transportation on its Electrostar platform at Derby Litchurch Lane Works from 2001 to 2014. 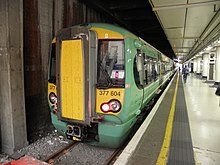 The trains work suburban services in South London, and main-line commuter services to Sussex, Surrey, Kent and the South Coast, on which they replaced 4Cig and 4Vep slam-door stock that was more than 40 years old and did not meet modern health and safety requirements. Built in the early 2000s, the units had a troubled introduction; being fully air-conditioned, their higher power consumption compared to the trains they replaced led to major upgrades being required to the 750 V DC third-rail power supply used in the former Southern region.[2] The collapse of Railtrack following the Hatfield accident further delayed this upgrade work, and the new stock did not enter squadron service until 2003.

Class 377s are fitted with external CCTV. There is an open area for wheelchairs or prams, and both intermediate coaches have toilets. Bodyside power doors are electrically operated, a move away from the air-powered systems of previous generation EMUs. Dual-voltage units are fitted with a Brecknell Willis high-speed pantograph, incorporating a pair of aerofoils on the pan knuckle to steady the pan head against the OLE contact wire.[3]
The configuration of a 5-car Class 377 unit is:

The Class 377 use Dellner instead of Tightlock couplings used on the Class 375s.[4] Southern’s 375s were all reclassified to Class 377/3s upon conversion; these reclassified units can still be identified by their 3-car formation. Note that Southeastern’s 375s (sub-classes 375/3, 375/6, and 375/7) were also later converted from Tightlock to Dellner couplers but were not reclassified; its sub-class 375/8 and 375/9 units were fitted with Dellner couplers, as built.[5]

All units can receive power via third-rail pick-up which provides 750 V DC. There are eight pick-up shoes per unit (twice the number of previous generation 4-car electric multiple units), and this enables them to ride smoothly over most third-rail gaps. The units in the 377/2, 377/5 and 377/7 sub-classes are dual-voltage, and are fitted with a pantograph to pick up 25 kV AC from overhead lines. On these units (and on single-voltage sub-class 377/6), the shoe mechanism is air-operated so that when powered down, or working on AC overhead lines, the shoe is raised out of the way. This is used on trains from Milton Keynes to East Croydon, which use part of the West Coast Main Line between Milton Keynes and Willesden Junction, and then the West London Line towards Clapham Junction. These trains change to third-rail DC supply on a dual-voltage section of the West London line north of Shepherd’s Bush.[6] Since March 2009, dual-voltage Class 377 units operated some Thameslink Bedford to Brighton, Rochester and Ashford services (see below). The Bedford to Brighton services are now run by Class 700s, while the Class 377/5s themselves are now operated by Southeastern.

Among the remaining units, the trailer coach in each unit has a recess in its roof where a pantograph could be fitted, to allow for future conversion to overhead AC power.[citation needed]

Additional units and the Thameslink Programme[edit]

In April 2007, as part of the Route Utilisation Strategy for the Brighton Main Line, it was announced that Southern would procure an additional 48 Class 377 carriages to replace an identical number of Class 319 carriages (12 x 4-car units) due to be transferred to First Capital Connect.[7] Eleven further dual-voltage units were then added to the order, making a total of 23. The units were commissioned at Southern’s Selhurst depot in Croydon before being transferred to First Capital Connect’s Bedford Cauldwell depot. The first of these, unit 377501, was delivered to Cauldwell depot on 27 February 2009 after making its first appearance through the Thameslink Central London core. The 377/5s operated mainly on Bedford to Brighton services but in the peaks formed part of First Capital Connect’s and Southeastern’s joint service to places such as Rochester and Ashford.

Delays in the construction of the Class 377/5s for First Capital Connect saw the temporary transfer of eight of Southern’s Class 377/2s to FCC to enable it to implement the planned timetable changes on 22 March 2009; the loss of these units until September 2009 was covered by the temporary cascade of a number of Class 350/1s to Southern from London Midland, which operated services between East Croydon and Milton Keynes.[8]

In September 2011, it was announced that Southern had begun the procurement of 130 vehicles, due to delays in the procurement of new Thameslink rolling stock that would prevent transfer of the 377/5s in time for the December 2013 timetable change.[9] The contract was awarded to Bombardier in December 2011.[10][11] The additional eight five-car units (from an option in the contract for 40 additional vehicles) are dual-voltage and known as Class 377/7.[12]

In December 2011, three Class 377/2 units were transferred from Southern to First Capital Connect to allow more 12-car services to operate.[13]

During mid-2013, the first of the new Class 377/6s arrived from Derby for type testing, and since October 2013, these units have been used in passenger service, initially in peak-hour services on the Sutton and Mole Valley lines, Epsom Downs Branch, Tattenham Corner Line and the Caterham Line.[citation needed] 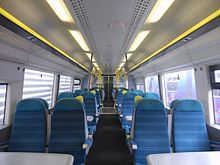 The interior of Standard Class aboard a Southern Class 377/4

Porterbrook is funding the £55 million five-year Project Aurora programme to refurbish 214 Class 377 Electrostars operated on Southern services.[15] The work started in 2020 and is being done at Selhurst depot; 377 430 was the first unit to be completed in early 2021.[16] Changes include the installation of screens showing live GTR and London Underground service information, the provision of USB and power points, energy-saving LED lighting and a passenger-counting system which will enable GTR to analyse how busy individual services are.[17]

In 2016, 19 of the 23 Class 377/5 units were planned to be transferred to Great Northern, for use on non-stop London-Cambridge services. However, the 29 former Thameslink Class 387/1s were transferred, instead.[19] The Class 377/5s were later transferred to Southeastern, as part of their requirement for additional capacity.

On 28 November 2016, a fire broke out in the MOSL car of a Southern Class 377 (unit 377442) at Eastbourne station, causing damage to the ceiling and interior. The cause was later identified to be faulty wiring within a hand dryer located in the toilet.[21]