Sapunov at the European Cup triathlon in Quarteira, 2011. 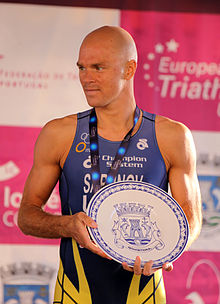 Sapunov with the bronze medal at the European Cup triathlon in Quarteira, 2011.

Danylo Sapunov (Ukrainian: Данило Сапунов, patronymic: Володимирович; born 5 April 1982 in Zaporizhya), is a Kazakhstani (since 2002 till 2009) and Ukrainian (until 2002 and since 2010) professional triathlete.[1] From 2008 to 2010, Danylo Sapunov was married to the Ukrainian triathlete Yuliya Yelistratova.

In the eleven years from 2000 to 2010, Sapunov took part in 95 ITU competitions and achieved 56 top ten positions, among which 13 gold medals. He was the best Ukrainian triathlete in the Men Olympic Ranking London 2012.[3]

Unless indicated otherwise, the following competitions are triathlons and belong to the Elite category. The list is based upon the official ITU rankings and the athlete’s Profile Page.[4]