Switzerland participated in the Eurovision Song Contest 2015 with the song “Time to Shine”, written and performed by Mélanie René. The Swiss German broadcaster Schweizer Radio und Fernsehen (SRF) in collaboration with the other broadcasters part of the Swiss Broadcasting Corporation (SRG SSR) organised the national final ESC 2015 – Die Entscheidungsshow in order to select the Swiss entry for the 2015 contest in Vienna, Austria. After narrowing down hundreds of candidate songs to a field of six entries, the votes of jury panel and a public televote selected “Time to Shine” performed by Mélanie René as the winner. In the second of the Eurovision semi-finals, Switzerland failed to qualify to the final, placing seventeenth and last out of the 17 participating countries with 4 points.

Prior to the 2015 contest, Switzerland had participated in the Eurovision Song Contest fifty-five times since its first entry in 1956.[1] Switzerland is noted for having won the first edition of the Eurovision Song Contest with the song “Refrain” performed by Lys Assia. Their second and most recent victory was achieved in 1988 when Canadian singer Celine Dion won the contest with the song “Ne partez pas sans moi”. Since the introduction of semi-finals to the format of the Eurovision Song Contest in 2004, Switzerland has managed to participate in the final four times. In 2005, the internal selection of Estonian girl band Vanilla Ninja (performing the song “Cool Vibes”) qualified Switzerland to the final where they placed 8th. Due to their successful result in 2005, Switzerland was pre-qualified to compete directly in the final in 2006. Between 2007 and 2010, the nation failed to qualify to the final after a string of internal selections. Since opting to organize a national final from 2011 onwards, Switzerland has managed to qualify to the final twice out of the last four years. In 2014, Switzerland earned their highest result in the contest since 2005, qualifying to the final and placing 13th with the song “Hunter of Stars” performed by Sebalter.

On 19 May 2014, Swiss broadcaster Swiss Broadcasting Corporation (SRG SSR) confirmed Switzerland’s participation in the 2015 contest and announced that a national final would once again select the Swiss entry.[2] The regulations and procedures for the selection were published on 18 July 2014.[3]

The selection process took place in three stages before the finalists for the live show and ultimately the winner are selected. The first stage of the competition included SRF/RTR, RTS and RSI each conducting varying selections in order to determine the candidates they submitted for the second stage of the competition. SRF/RTR submitted nine candidates, RTS submitted six candidates and RSI submitted three candidates. The second stage was the Expert Check live audition, where the 18 selected candidates performed the songs that qualified from their respective broadcaster selections. A jury panel selected three artists and songs to qualify from the SRF/RTR selection, two from the RTS selection and one from the RSI selection. The six artists and songs proceed to the third stage, the televised national final, where the winning artist and song was selected to represent Switzerland in Vienna.[4]

The SRF/RTR selection involved an online internet voting platform where interested artists could submit their songs and have them listed for public listening.[4] The platform began accepting entries on 29 September 2014 and concluded on 27 October 2014. 210 entries were submitted following the submission deadline, including entries from 1999 French entrant Nayah and former The X Factor UK participants Kirsten Joy and Kitty Brucknell.[5][6][7] Internet users had between 3 and 17 November 2014 to vote for their favourite entries.[8] The internet votes were combined with the votes from an expert jury and on 25 November 2014, the top ten entries for the Expert Check were announced.[9] The three candidates ultimately selected from the SRF/RTR selection for the national final were “Hey Now” performed by Andy McSean, “Singing About Love” performed by Timebelle and “Only Human” performed by Tiziana.[10]

The RTS selection involved interested artists submitting their entries to the broadcaster between 9 September 2014 and 27 October 2014. At the close of the deadline, RTS received 26 entries.[8] On 23 November 2014, ten of the entries were invited to perform live on Option Musique at the RTS Studio 15 in Lausanne where a jury panel that consisted of Catherine Colombara, Laurent Pavia, Emile Felber and Nicolas Tanner selected the six candidates for the “Expert Check”.[11][12] The two candidates ultimately selected from the RTS selection for the national final were “Fly” performed by Licia Chery and “Time to Shine” performed by Mélanie René.[10]

RSI opened a submission period between 16 July 2014 and 15 October 2014 for interested artists and composers to submit their entries.[13] On 4 November 2014, a jury panel consisting of 2008 Swiss contest entrant Paolo Meneguzzi, Iris Moné and Simone Tomassini evaluated the 28 entry submissions received and selected the three candidates that proceeded to the “Expert Check”.[14] The candidate ultimately selected from the RSI selection for the national final was “Take Me Back to 23” performed by Deborah Bough.[10]

The “Expert Check” of the eighteen selected candidates was webcast from SRF Studio 5 in Zürich on 7 December 2014 and was hosted by Clarissa Tami.[4][15] The candidates performed their songs in front of an expert panel which assessed the performers on criteria such as live performance skills, voice quality and stage presence. The expert panel consisted of choreographer Rafael Antonio, vocal coach Freda Goodlet, the director of strategic marketing at Universal Music Switzerland Moritz Faccin (representative of SRF), the director of Option Musique Catherine Colombara (representative of RTS), and musician Nicola Locarnini (representative of RSI).[10] Three artists and songs qualified from the SRF/RTR selection, two from the RTS selection and one from the RSI selection.[10][16]

ESC 2015 – Die Entscheidungsshow took place on 31 January 2015 at the Bodensee Arena in Kreuzlingen, hosted by Sven Epiney.[17] The show was televised on SRF 1, RSI La 2 with Italian commentary by Clarissa Tami and Paolo Meneguzzi and RTS Deux with French commentary by Nicolas Tanner and Jean-Marc Richard.[18][19] The competition was also streamed online at the respective official website of each Swiss broadcaster.[20] The show consisted of two parts: in the first part the six candidate songs in contention to represent Switzerland were performed and in the second part each artist performed a cover version of a song of their choice. For the cover song round, Deborah Bough performed “Shake It Off” by Taylor Swift, Timebelle performed “Rude Boy” by Rihanna, Licia Chery performed “All About That Bass” by Meghan Trainor, Andy McSean performed “Chasing Cars” by Snow Patrol, Mélanie René performed “Chandelier” by Sia, and Tiziana performed “The Power of Love” by Frankie Goes to Hollywood.[21] In addition to the performances from the competing artists, Austrian Eurovision Song Contest 2014 winner Conchita Wurst performed “Rise Like a Phoenix” as the interval act. 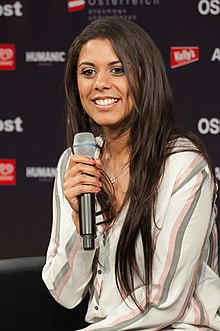 Mélanie René at a press meet and greet

According to Eurovision rules, all nations with the exceptions of the host country and the “Big Five” (France, Germany, Italy, Spain and the United Kingdom) are required to qualify from one of two semi-finals in order to compete for the final; the top ten countries from each semi-final progress to the final. In the 2015 contest, Australia also competed directly in the final as an invited guest nation.[24] The European Broadcasting Union (EBU) split up the competing countries into five different pots based on voting patterns from previous contests, with countries with favourable voting histories put into the same pot.[25] On 26 January 2015, a special allocation draw was held which placed each country into one of the two semi-finals, as well as which half of the show they would perform in. Switzerland was placed into the second semi-final, to be held on 21 May 2015, and was scheduled to perform in the second half of the show.[26]

Once all the competing songs for the 2015 contest had been released, the running order for the semi-finals was decided by the shows’ producers rather than through another draw, so that similar songs were not placed next to each other. Switzerland was set to perform in position 14, following the entry from Sweden and before the entry from Cyprus.[27]

Mélanie René at a dress rehearsal for the second semi-final

Mélanie René took part in technical rehearsals on 14 and 16 May,[32][33] followed by dress rehearsals on 20 and 21 May. This included the jury final where professional juries of each country, responsible for 50 percent of each country’s vote, watched and voted on the competing entries.[34]

The stage show featured Mélanie René in a long ivory dress with a transparent black cape standing on a pedestal at the centre of the stage. René was flanked by backing vocalists who wore black costumes with fringes and played large drums. The background LED screens displayed forest scenery. The performance also utilised special effects in the form of a wind machine, CO2 jets blowing from the ground and “falling star” pyrotechnics.[32][33] On stage, Mélanie René was joined by four backing vocalists: Anissa Condemi Montemouhin, Idyl Nahla, Flavie Crisinel Cheuwa and Natacha Karine Montille.[35]

At the end of the show, Switzerland failed to qualify to the final and was not announced among the top ten nations.[36] It was later revealed that Switzerland placed seventeenth and last in the semi-final, receiving a total of 4 points.[37]

Voting during the three shows consisted of 50 percent public televoting and 50 percent from a jury deliberation. The jury consisted of five music industry professionals who were citizens of the country they represent, with their names published before the contest to ensure transparency. This jury was asked to judge each contestant based on: vocal capacity; the stage performance; the song’s composition and originality; and the overall impression by the act. In addition, no member of a national jury could be related in any way to any of the competing acts in such a way that they cannot vote impartially and independently. The individual rankings of each jury member were released shortly after the grand final.[38]

Below is a breakdown of points awarded to Switzerland and awarded by Switzerland in the second semi-final and grand final of the contest, and the breakdown of the jury voting and televoting conducted during the two shows: