Set in the near future in the Great Era of Detectives, chosen people are born with supernatural abilities known as Toys (トイズ, Toizu). Those who use these Toys for evil are responsible for a wave of crimes and necessitate employing Toy-using detectives to help solve them. In the Yokohama District, Opera Kobayashi runs a detective agency named Milky Holmes, made up of four budding young detectives, Sherlock Shellingford, Nero Yuzurizaki, Hercule Barton and Cordelia Glauca, who each wield their own unique toys and train to become detectives at Holmes Detective Academy.

The video game casts players in the role of Kobayashi, who must utilise Milky Holmes’ unique abilities to stop the Thieves’ Empire, a band of thieves led by the mysterious Arséne. The second puts players in the role of another detective, Ellery Himeyuri. The Alternative TV specials also take place in this universe, in which Kobayashi and Milky Holmes are assisted by another Toy user, Lily Adler, in fighting against the Thieves’ Empire whilst visiting London.

In the first two anime television series, the four girls of Milky Holmes, Sherlock, Nero, Hercule and Cordelia, end up losing their Toys during an encounter with the Thieves’ Empire. Taken away from their rich lifestyle and thrown into an attic, the girls must try to regain use of their Toys or else face expulsion from Holmes Detective Academy. Futari wa Milky Holmes, which takes place two years after the other series, follows two young girls, Alice and Kazumi, who, inspired by Milky Holmes, form their own detective unit, Feathers, and fight against a group of thieves known as the Color the Phantom. Tantei Kageki Milky Holmes TD sees Milky Holmes help an idol named Marine Amagi recover her Toys, the seven Elements, which have been stolen from her. 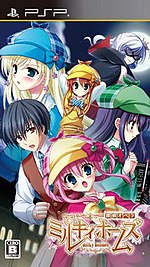 Box art of the video game for the PSP.

A manga adaptation illustrated by Sorahiro Mizushima was serialized in Kadokawa Shoten’s Comp Ace magazine between May 2010 and January 2011 and was published into two tankōbon volumes.

A visual novel developed by Bushiroad was released on PlayStation Portable on December 16, 2010.[16] Players play the role of Opera Kobayashi, who must train Milky Holmes to be great detectives and use their abilities to stop thieves. The game’s second chapter, Tantei Opera Milky Holmes 1.5 was released on September 29, 2011 from the PlayStation Store.[17] A sequel, Tantei Opera Milky Holmes 2, was released on August 23, 2012, casting players in the role of a new protagonist named Ellery Himeyuri.[18]
A new music-based video game based on the animated series was announced by Bushiroad in July 2013 for release in 2014.[19]

The four main characters of Milky Holmes appear briefly in many different episodes of Cardfight!! Vanguard as cameos where they are simply shown in the background. The voice actresses also make a cameo as the Milky Holmes in episode 23 of Fire Leon, a live action series also produced by Bushiroad. In this scene, Suzuko Mimori portrays both Sherlock Shellingford and Yû Kusayanagi, a recurring character of the series. Additionally, the character “Sherlock “Sheryl” Shellingford” appears as a “guest” partner in the Japanese MMORPG Onigiri Online.

An idea of a movie adaptation was first teased in the form of clues hidden within the end cards of the delayed fifth episode of Tantei Kageki Milky Holmes TD for fans to solve. Tokyo MX, TV Kanagawa, Hokuriku Broadcasting, TV Aichi and Sun TV aired the same episode in different regions, but showed a different pair of letters in the end card, which when rearranged vertically could be read as “Milky Movie”.[20] A leak also emerged from the Japanese retail website Gamers’ listing for the April issue of Monthly Bushiroad magazine, which included an image sample of a bundled publicity image extra which said “Milky Holmes movie adaptation planning start!!” The image has since been taken down from the website.[21] The existence of the project was officially revealed later in a special edition of Miru Miru Milky, a variety show starring the main voice actors, and confirmed by the Milky Holmes official website the next day. However, it was also announced that they need support from the fans to realize its production, meaning the project hasn’t gotten greenlit for production yet.[22][23]