The 2014 World RX of Canada was the 7th round of the inaugural season of the FIA World Rallycross Championship.[1] The event was held at the Circuit Trois-Rivieres in Trois-Rivieres, Quebec. 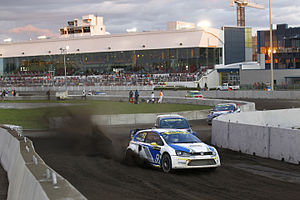 † Joni Wiman qualified for the semi-finals, but was unable to take the grid. Reinis Nitišs was allowed to take his place.

Championship standings after the event