The 2015 World RX of Canada was the seventh round of the second season of the FIA World Rallycross Championship.[1] The event was held at the Circuit Trois-Rivières in Trois-Rivières, Quebec. 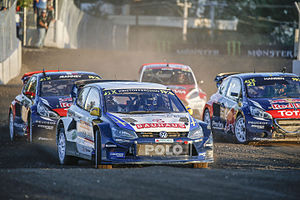 ‡ Anton Marklund used a Marklund Motorsport-built Volkswagen Polo this round, following a crash in testing of his Audi S1 prior to the event.

Championship standings after the event