Alpha Ventus’ location in the wind farms of the German Bight 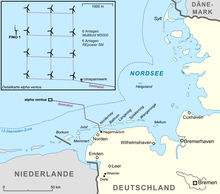 The application for construction of the wind farm near Borkum was submitted in 1999. The permit was given by the Federal Maritime and Hydrographic Agency in 2001. In 2007, contracts for supplying wind turbines were signed with REpower and Multibrid (later: Areva Wind and Adwen). That same year, a contract for the construction of a subsea cable connection to the German grid was signed. Construction of the alpha ventus substation started in July 2008. On July 15, 2009, the first wind turbine was installed and the first six turbines delivered by Multibrid went operational in August 2009. Installation of another six turbines delivered by REpower started in September 2009.[1] The foundations for the Multibrid turbines were so called tripods designed by OWT. The foundations for the REpower turbines were developed and designed by OWEC Tower. Construction of the wind farm was completed on November 16, 2009 after a seven-month construction period. On April 27, 2010 the farm was officially opened and set into commercial operation.[2]

The wind farm is owned by Deutsche Offshore-Testfeld und Infrastruktur-GmbH & Co. KG, a joint venture of EWE (47.5%), E.ON (26.25%), and Vattenfall (26.25%).[3] It consists of twelve turbines, all with capacity of five megawatts. There are six Adwen AD 5-116 (former Areva Multibrid (M5000)) turbines and six REpower 5M turbines. Turbines stand in 30 m of water and are not visible from land, however they are barely visible from Norderney’s lighthouse, and easily from the island of Borkum.[4] The REpower turbines are installed onto jacket foundations (OWEC Jacket Quattropods) by the crane ship Thialf and Adwen turbines are installed onto tripod-style foundations by the jack-up barge Odin.[1] In May 2010, two Multibrid generators went off service due severe overheating in their gearboxes.[5]

Because it is the first offshore wind farm in Germany, alpha ventus is accompanied by several research projects sponsored by the Federal Ministry for Environment (BMU). In 2003, the research platform FINO 1 was built approximately 400 m to the west of the wind farm. Research interests include:[13]